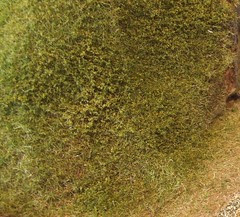 Static grass is nice but I didn't want a lawn on this model railway, I wanted the sort of unmown scrub you see on hillsides.

To get this effect, I waited until my nice nylon fibres had dried and then gave them a waft of hair spray followed by a sprinkle of different shades of green Woodland Scenics flock. Other flocks are available but I had this stuff to hand. For this job I used the finest version but the coarser variants might produce some useful effects if you want the really over-grown ground found where only sheep and goats dare to tread.

Whisper it if you need, but hair spray is basically glue in an aerosol. OK so it has perfume but it's still not a lot different from SprayMount. In fact I bet there are a good few metrosexual graphic designers who've experimented when they are doing a layout and run out. Likewise, how would you explain Jedward ?

Anyway, get the cheapest stuff, I use a can sold as "Clubbers Extra Hold" which is presumably something for Canadian Seal farmers to keep their barnets under control in the icy wastes. Or maybe for those working for Jacobs producing the delicious chocolate covered biscuit (Club Biscuit, keep up. I'm trying to make you laugh as it's Friday).

Whatever, it seems to last for many years in the role of sticking ground foam to stuff. The smell dissipates after a few minutes too although I have wondered if a quick re-application wouldn't be a bad idea when I get certain people in front of the train set at a show...
Posted by Phil Parker at 4:43 AM