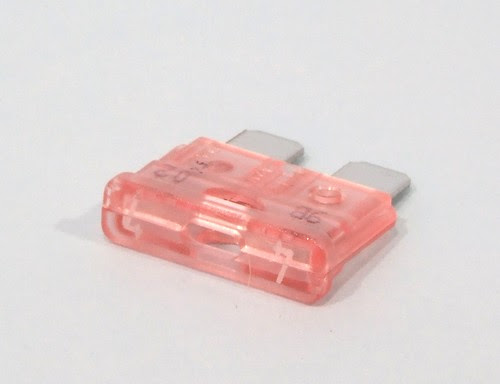 I am the proud owner of a rather longer MOT fail sheet than I had anticipated receiving for my Peugeot 206. This does not Phil a happy boy.

Items 1 and 2 are related. The rear fog light isn't working and neither is the "tell tale" on the dashboard.

I wasn't going to pay good money to change a bulb so set to to do this myself. A look in the manual, thankfully still with the car, showed that both were operated through fuse 19, a 5amp'er. If something electrical is duff in a car, start with the appropriate fuse as there is a good chance that's what it will be. If not, at least you've eliminated the fault that you'll kick yourself for ignoring.

So, I look in the fusebox and what don't I find ? Fuse 19. It's not blown, it's completely missing.

Putting a new fuse in place restored both fog light and tell-tale.

What I don't understand, is where the thing has gone. Presumably there once upon a time. I certainly haven't taken it out. The car passed the MOT at the same garage last year where they certainly checked the front fogs.

Oh well, at least that's two items off the list. Now a new tyre, gaiter and freed up brake load linkage and I'll be legit again. Pity all these are the expensive ones !

(I know the photo shows a 4 amp fuse, the spare 5 amp is going to live in the car so I had to use this one for a picture. Yes I know I could have gone and got the right one but that would have meant going downstairs and unlocking the car, and I couldn't be bothered.)
Posted by Phil Parker at 6:18 AM

Where did it go ? Almost certainly to replace another similar fuse elsewhere in the fuse box.
It's summer time so I will not need the fog lights for a few months so I will just "borrow" their fuse.