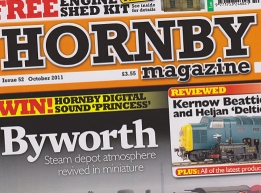 Octobers Hornby magazine is already widely regarded as the best ever and not just because of the stuff I wrote in it. For your money you get a big fat issue with the first part of a nice looking card kit.

From me, we have:

I'm very pleased with the wagon as it's the most complex kit built for the column yet and I had to employ some interesting techniques to get it together. The problem with writing for beginners is that you can't really assemble a whitemetal kit using solder - it's scary enough for modellers with a bit of experience under their belt to work with low melt parts and a hot iron. On the plus side, this makes me innovate and in this case I worked out a method involving epoxy resin glue.

Chatting to Robert of RT Models, he assembles the test models using superglue which proves it can be done, and that at least one manufacturer tries his kits before selling them. It's fine to do this if you are confident or have a never ending supply of bits, but for my audience I reckon that some adjustment time is more helpful.

Now, my second magazine appearance this month is in BRM where I'm the subject of a 30 second interview. Something carried out so long ago that it was before I failed to renew my L&WMRS membership and Radcliffe & Maconie were on Radio 2 instead of Radio 6.

The sharp eyed will notice that I am pictured wearing a bear costume. I know this because at least one person already has.

To explain, a few years ago, I was in charge of the Warwickshire County Council website. The county shield has a bear on it. The country museum has a stuffed bear in it. The Council had at least 2 bear costumes.

Looking to promote our new Events Guide, I foolishly said to the press office that I would be happy to do anything we needed to get some coverage. On wandering down to the office at the appointed time for the photo, I was greeted by Caroline. And a black sack. In the sack was a costume.

20 minutes later I was posing for the local press dressed as a bear. Needless to say, since I had the head on, I could have just sent anyone !

Mind you, it didn't stop me. I definitely wore the thing at least twice more. Back in those days I needed padding to do it justice too. Sadly, I think I'd be better fit now !
Posted by Phil Parker at 2:50 AM