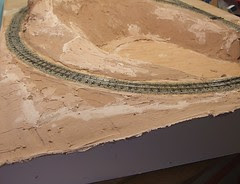 The sides of the Handyman Hall model railway exposed the structure that supported the track and it wasn't pretty. I had expected this and while buying wood, picked up an off-cut of hardboard. This was cut roughly to size and then the final contours formed with a surform. Some blending with filler brought the earthworks up to the edges.

To be honest, I hadn't expected the difference doing something as simple as this made to the look of the model. Suddenly the groundwork's looked solid and substantial. The model looked like it had been cut out of the earth. I suppose it's like stage sets which look terrible if you can see the edges but fine when these are hidden away with the simple expedient of hanging curtains in front of them. They wouldn't provide the protection to the plaster that the wood does of course. And I'd have to iron them which would be rubbish.

While the surform was out, I've been smoothing off any ridges in the plasterwork and filling in any hollows I didn't like. My mix wasn't as good as it could have been so the earth is several different shades of brown, but that won't matter soon.
Posted by Phil Parker at 1:45 AM

Actually, we also rely on distance to hide imperfections in stage sets. If you look at a set closely you'll find it looks pretty blotchy and crude because it's designed to be viewed a long way away under very unnatural light. It's amazing what you can get away with.