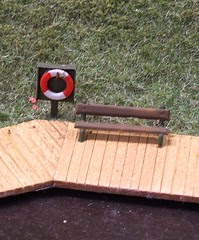 Down at the model lakeside on the 009 model railway, I felt it was time to make sure my model boaters were both safe and comfortable.

The first stage is easy - if anyone is going to fall they will need a lifebelt to keep them on the correct side of the wet stuff (we will ignore the fact that the wet stuff is in fact varnish so if anyone fell in they would get a bump on the head making a crash helmet more useful than a lifebelt). The belt comes from my model boating supplies. Originally it had a set of ropes sticking out from the side but they looked wrong so I cut them off. Real lifebelts do have ropes to make them easy to grab in the drink, but these stuck out at all angles.

Once I did this I realised I could have just cut a disk from plasticard and then knocked a hole in it for the same effect. Never mind.

The support is from scraps of plasticard. They all seem pretty similar, a backboard and small sloping roof nailed to a post. Green is the most popular colour too, presumably to blend in with the countryside.

Since model boaters tend to be old, a nice bench from the Merit range suitably painted will give them somewhere to sit down. People overlook these bits as they have been around since Cyril Freezer was in short trousers, but with a little cleaning up and a lick of paint, they are pretty good. This one looks nicely municipal too.

Finally, I need someone down at the lakeside and handily, Monty's Models produce a suitable figure and his yacht. To be picky, the boat looks more like a traditional pond yacht rather than the sort of radio control boat we now use but it is still possible to build one of these from a kit and you could RC it so it's not out of the question. Maybe I need to build a 1/72 handset to fend of the model boat anoraks (sou'westers ?). 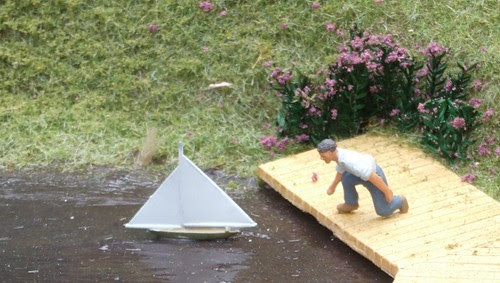 I knew I've been doing something wrong all these years. But is it dodgy modelling or dodgy typing ?