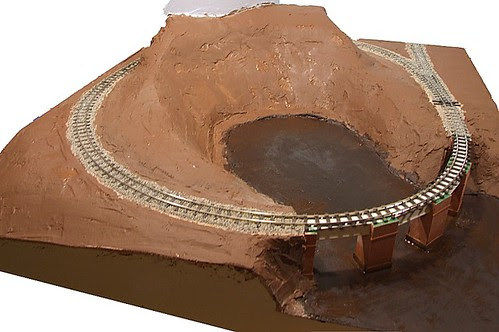 Do you use proper model making products for all your model railway needs ?

I don't. I prefer to use everything and anything as long as it does the job. Model making stuff is frequently real stuff re-packaged into small tubs with a 500% markup. I know someone who took a tub of Halfords molybdenum grease, some little jars and funded his trade stands tip to the show with the profits. My conversion to real stuff happened thanks to a Blue Peter annual back in the 70's where it showed how to make a wagon load of pipes from pasta. Just as good a Merit ones to someone with little pocket money.

Anyway, the plaster needs a coat of paint as it's not nearly brown enough for my liking. Doubtless there is something sooper dooper available from the trade that all the P4 modellers will flock to buy, but I'm stingy so a couple of matchpots from Wilkinsons will do just as well. I pick the most mud like shades (who has these on their walls ?) and slop them around everywhere. Using more than one shade while wet gets them to mix. I suppose some sort of shading effect could be applied to the hill to make it look even more 3D but I didn't worry.

In fact the hill has me worried. It's looking like something from a film. Close Encounters of the Third Kind to be precise. If you've seen it, you'll know that Richard Dreyfuss builds something very similar in the middle of his train set. And then in his lounge. And then he find the real thing and aliens happen all over the place. Who know what is hiding in the fiddle yard ?

Below the slopes I've started on a lake. At this point it's just a pure coat of the dark emulsion with some black powder paint chucked in it to give some streaks. I'll gloss it up with varnish later to make it look wet but the moment you can see it's all coming together.
Posted by Phil Parker at 3:53 AM

"Do you use proper model making products for all your model railway needs ? I don't. I prefer to use everything and anything as long as it does the job..."