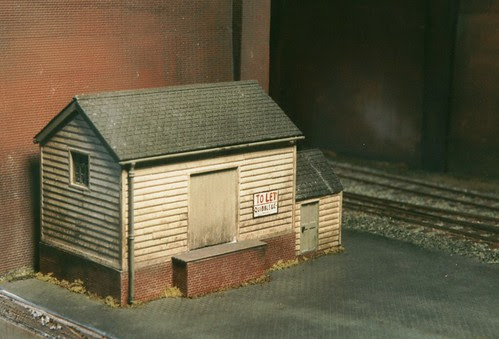 Digging through some old photos, I found this one of the layout that persuaded me to stick to small model railways. I was always quite proud of the building despite it being a really simple project.

The layout was Melbridge Town - and 18ft long roundy-roundy with lots of track. My father and I fancied having a go at something bigger than Melbridge Dock and looking at various models at exhibitions we came up with a plan involving long trains running through a station set in a cutting. Behind the running line would be some transfer sidings to the docks. We'd also have a tramway with a town scene. All this was fine but building the thing took forever and we only exhibited it twice before giving up.

Despite this, I was quite pleased with some of the results. 20+ foot of retaining wall looked OK. The buildings were nice too, especially the simple ones like this.

Construction simply required me to assemble a Wills Goods Yard Store (SS63) but replace the wooden legs with something rather more substantial - in this case brick platicard. Using the same companies sheet materials a little office was added on the side too. This sort of modelling is great fun, in fact I'm already thinking another attempt at this model would make an interesting idea for a magazine column.

Since the model was of a station that had seen better days, an etched sign, from Langley I think, proclaimed that the building was available for rent. A little Woodland Scenics course ground cover blended the base to the cobbles to give a slightly run-down appearance. Nowadays I'd probably add some static grass or a bit of plumbers hemp for even more decrepitude.

Now for the plug - read a little bit more about Melbridge Town in my book.
Posted by Phil Parker at 5:43 AM