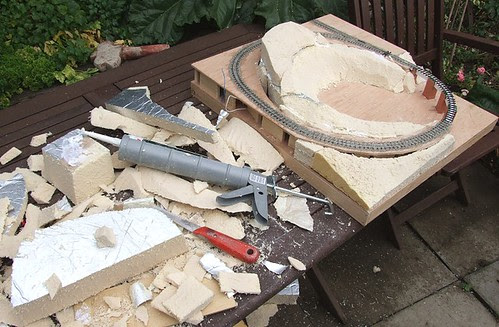 Back in the old days, railway modellers would use chicken wire and wooden formers covered with plaster bandage for hills. This works well but chicken wire is nasty stuff in my opinion - difficult to cut and with loads of sharp bits to damage delicate hands. I'm not much cop at making accurate wooden formers either.

Anyway, more modern layout builders moved on to expanded polystyrene. This is really easy to cut either with a saw blade or bread knife. The mess is incredible though. Millions of stupid white balls that get everywhere and are nearly impossible to clean up. Even a good vacuuming will leave some behind.

A hot wire cutter reduces the mess but at a cost of producing poisonous gases so it has to be used in a well ventilated space. Anyway, I don't own one of those and if I did, the shapes aren't that easy to get in an out of the model landscape.

Lucky for me then that our next door neighbours are busy converting their garage to a room. It needs proper insulation and this is carried out using a dense foam covered with silver paper. Being as transparent as a breeze block, a section had to be cut out for the window and so a little bit of skip-diving saw me with a slab big enough for a couple of layout.

The foam cuts with a wood blade in a Stanley knife handle. It's still messy but the mess is heavier than styrene would be so it doesn't spread all over the place. The silver paper peals off but the stuff can be stuck together with "no more nails" glue even if you don't do this.

The job is a bit like sculpture but a heck of a lot easier than chipping away at a bit of marble !
Posted by Phil Parker at 1:45 AM

Here at Bron Hebog we're proud to be backwards! - we're still forming our scenery with wooden formers and chicken wire.