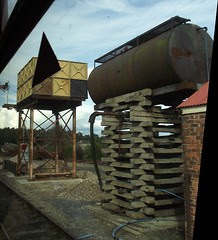 My parents went up to Scotland last week to see the Edinburgh Tattoo. The organised tour they were on had scheduled a trip to a distillery on the Friday and since they don't drink, and had already seen all the copper pipework they could handle on a previous tour, they decided to bunk off. A short walk from the hotel was a station and a short train ride from there was the Strathspey Railway.

Ensconced on a steam hauled train and stuffing themselves with a lovely afternoon tea, they took a few photos out of the window so they had something to show me what a good time they had enjoyed. Out of all the shots, I particularly like this one. Obviously there were more scenic photos but this is interesting. Two water towers.

The steel version is standard enough. Lots of identical panels are bolted together and stood atop some spindly legs braced with thin rods. The unusual feature is a signal bolted to the side. I'm not sure this ever happened on the real railway, but if you know better, please drop something in the comments.

The other tank looks like a oil tank thanks to the walkway along the top, but the pipe out the side would indicate that it's currently being used to dispense water. What really interests me is that it's supported on a pile of sleepers. Not wooden ones, as you might expect, bu concrete ones. Again, can anyone suggest anywhere else this has happened ?

On my narrow gauge model, I wonder if I ought to try something similar. This sort of made-do engineering is certainly in the spirit of narrow lines.

Strathspey railway website
Posted by Phil Parker at 5:54 AM