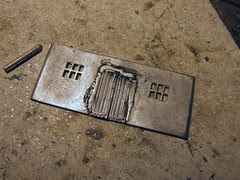 The GWR had some funny ideas and one of the odder ones was the choice of pagoda roofed buildings for branch line halts. Distinctive but, why ?

Anyway, I decided that the Handyman Hall Railway should have one of these in the station area. It's not that I'm going all Great Wobbly, just that preserved lines have a magpie like tendency to acquire little buildings and re-erect them in odd places. I think that my miniature volunteers have bagged themselves a pagoda and decided to put it in the yard to impart some big railway atmosphere.

Well, that and I found a whitemetal kit for just such a building in my spares box and thought it would be fun to give it a home on the layout. Please don't ask me who made the kit however as the bag was unmarked.

Even if I did work it out, or someone answered the question in the comments, I'd not loose sleep trying to find another. Wills produce a very nice version as part of a halt kit. One of the RTR firms does a resin version too. Either would be easier to use than the poor-fitting parts I contended with.

To be fair, pagoda's aren't easy to make. There are curves and angles that make the kit manufacturers life difficult. As it was I quickly decided that only low-melt solder would do the job here. Glue is fine if the bits all fit well but soldering is better when you need to fight the kit. It's faster and if a joint breaks it can be remade in seconds. Also, the metal can both attach and fill the gaps between parts, very handy on the roof which would have been a tad leaky if I hadn't worked on it a little.
Posted by Phil Parker at 1:49 AM