Last year I took my car for its MOT and was presented with a green form for a pass and a yellow advisory form listing things I should look at during the year. It said:

I had meant to look at this during the following 12 months. I really had. But I didn't.

This year I picked up a red form with some bad stuff on it starting with the word FAIL.

Among the grief was this:

Or to put it another way, I hadn't bothered to look at the problem when I was told to so now it was coming back to bite me on the backside.

My first problem was I didn't actually know where this linkage was. A quick look in the Haynes manual, followed by a peek when the rear tyre was being replaced showed me it's at the back, on the drivers side (this applies to cars where the driver sits on the right, as God intended, where the thing is on other vehicles, I dunno.) 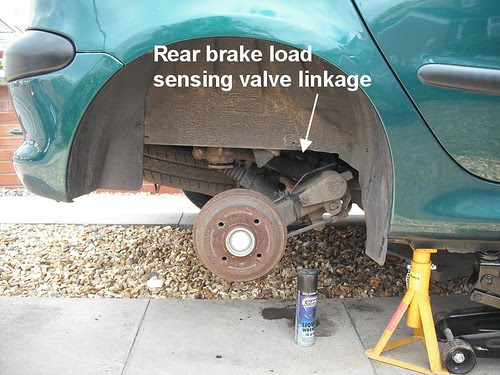 (Note: Car is on a 3 tonne jack AND and axle stand. Do not rely on a single jack when sticking you head under 1 tons worth of motor vehicle)

It's behind the wheel arch. You can just see the spring that connects it to the rear suspension. My understanding is that the linkage controls a valve that alters how much brake force is applied to the back wheels depending on the load you have. Put some fat blokes in the back seats and you get more or less brakes at the back. Not sure which to be honest, but that's not the point.

At one end there is a spring: 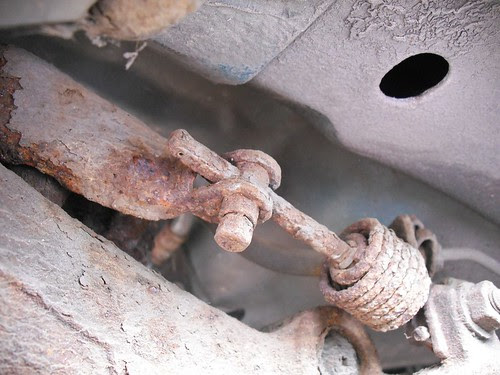 which connects to a lever. The other end of the lever wraps round the valve here: 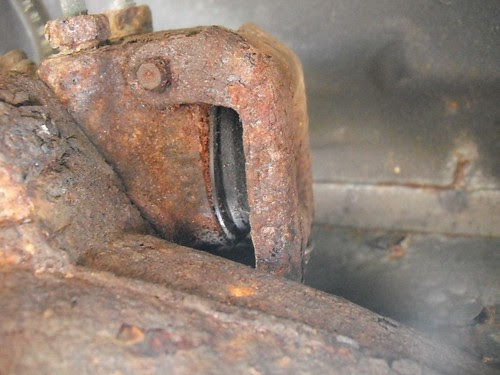 As the suspension goes up and down, this lever should move a bit and presumably alter the position of a plunger in the box with all the brake pipes coming out of it. Mine had seized up solid thanks to its position under the car, right where all the wet and muck is.

Now what I should have done is sprayed it regularly with penetrating oil and then greased it up. That would have stopped the problem in the first place. Faced with a fail sheet, what I did was spray about half a can of the stuff over the pivots, spring, and pretty much anything else in the vicinity over about half a Saturday. Then I tried to waggle the lever by gripping one end with a pair of mole grips. This produced movement but not much and I wasn't sure if the metal was bending (bad as it could snap) or the pivots had freed up.

As it was I took the car to Geoff. There was a gaiter to replace as well and I wasn't in to this - VeeDubs are so much easier in this respect - and he's next door to the MOT people so I can be confident he will do the work to their satisfaction.

Geoff said that 2/3rds of the Peugeot 206's he sees with MOT fails have this problem. What he does is stick a screwdriver under the plate and waggle it about. If it's not too rusted, this will solve the problem. My oiling didn't hurt though and a future treatment will hopefully stop this appearing on the sheet next year.

Legal note: This is an accurate description of what I did. I am not a professional mechanic and these notes are offered for entertainment only. If you chose to follow them and things don't work, it's not my fault. Sorry. If you are at all unsure then get a professional to do the job.
Posted by Phil Parker at 2:06 AM

Very useful info here,my car, a 206 Roland Garros,failed its MOT on"Load sensing/Regulating Valve assembly"
Is this the same thing as you posted here?
Thanks,
Merv

It certainly sounds simialr. I guess it's just different terminology from different garages.

Thanks Phil,
it was the same thing,Following your advice so far it's still free movement in it since the last MOT.
Merv

Only I'm prepping for MOT again & even tho the valve has about 5-10mm movement,the bar stays fixed in the pivot.My engineering backgtound (Aeronautics) says it's fixed but just want to check to make sure.

My 206 just about passed for this, the guy said to oil it but didnt know where to find it, thanks for your guide.

My car failed its MOT on the load sensing valve linkage not moving as it should.

Many, many thanks for your post, I have got the Haynes manual, but the pictures do not show the valve and good as yours and also the Haynes manual does not describe how to free the linkage. Did exactly as your listing, and my car Passed its MOT. Your description of how to do it, is better than the Haynes Manual. Thanks John

Lorna - I don't know but it doesn't sound good. You need to find a proper grease monkey mechanic to stand a chance of getting it freed. A dealer will insist on a replacement. Good luck!

Just google searched and found this... Very helpful and the linkage is now not seized. Thanks a lot!

Hi, I had the same problem as this but when I freed off the linkage I found the spring had broken. i have a new spring to put on but do I have to set the tension with the valve open or closed?

Ni idea. If it helps, my photo is taken with the wheel off but with the spring rusted up a bit.

Hi, I just had to replace the unit on my 206 as it was rusted to glory. I learned: the unit is pulled in the fully on state by the springs. When you press brake pedal, the valve tries to close by hydraulic pressure of rear brake cct. You can see the lever move out, against the springs as you press brake pedal. To set, there is provided a plastic tool to tension the main spring as the car is sat on its wheels unloaded. This tool would not stay put, so I just pulled the same tension on the spring before tightening the bar locking nut. If heavy laden, spring is put under tension: valve stays more open allowing rear brakes to come on harder.

Hi, I just had to replace the unit on my 206 as it was rusted to glory. I learned: the unit is pulled in the fully on state by the springs. When you press brake pedal, the valve tries to close by hydraulic pressure of rear brake cct. You can see the lever move out, against the springs as you press brake pedal. To set, there is provided a plastic tool to tension the main spring as the car is sat on its wheels unloaded. This tool would not stay put, so I just pulled the same tension on the spring before tightening the bar locking nut. If heavy laden, spring is put under tension: valve stays more open allowing rear brakes to come on harder.

Hi. My car just failed on this and don't have a clue what to do to it as the tester has put on the sheet that it's broken

Just failed on brake valve on206,told it was not repairable, new one needed. Are they expensive?

Cost of unit is one thing, labour to fit will be equal. When I fitted mine I had to make new hydraulic lines to the wheels. Fortunately the line to the front of the car was serviceable, but if not I suppose they would have to replace the whole thing, or else pucut off the corroded end and splice s new end on there?