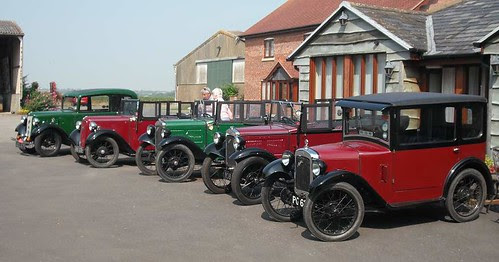 A few days ago, and Auston 7 Rally took place near where I live. Some of the owners didn't just travel over for the day, they decided to make a holiday of it. Since kipping in back of one of these cars isn't that practical, several chose to stay over at the holiday cottages next to our boat club.

Which is why I was able to take these photos as the vehicles lined up in the sun before setting out on a tour.

The great thing about classic car owners is that they love nothing more than talking about their car. If you happen to own an old banger (sorry, classic) yourself then they are extra interested and will talk about all sorts of anoraky technical details.

You also gain a level of trust that allows you to ask if you can sit in the car. Which is why I ended up folding myself into the driver seat of the second car on the right. It's owner did say that if I was driving I would need to put the seat right back and he wasn't kidding. Of course, doing this involved lifting the squab out and undoing bolts, so we didn't bother. 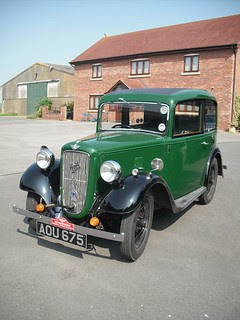 What it did illustrate was just how small pre-war cars were. Our house was built in 1948 and houses my Beetle in the garage but will remove the wing mirrors from a modern car. We know this for a fact. Slide one of these babies in and you'll still be able to get out of the door. There will be plenty of space to work on the engine too and access through the bonnet is really excellent.

For a railway modeller, this sort of car will make your layout look OLD. The Austin 7 was produced until 1939 and would still have been a regular sight on the roads until 1960 when the MOT test would have dramatically reduced the number of rickety vehicles on the roads. Even then, cars weren't that common and owners were accustomed to mending their motors, hence the survival of them today.

Sadly, as far as I know (and please comment if I'm wrong), the RTR model world has neglected the Baby Austin. There are kits available from Scale Link in 4mm scale though and have one on Flockburgh from the 3mm Society. In 1/24th, South Eastern Finecast produce a very covetable kit and well as a couple of options for 7mm modellers.

Update: Another option is the Revell 3/15ps kit which is an Austin 7 variant built under licence. Left hand drive and 1:24 but worth a look if you can find one. Hat tip to Christopher Payne for this one.

Austin 7 Wikipedia Entry
Posted by Phil Parker at 6:00 AM