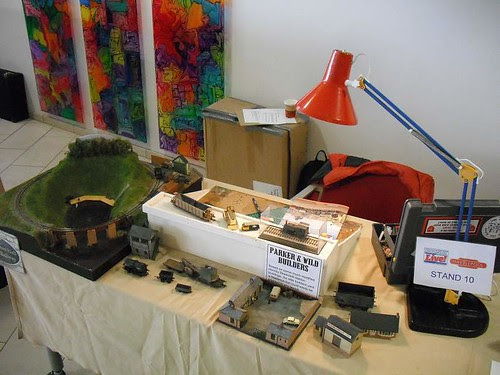 This time last week I was preparing for the second day of Hornby Magazine Live in sunny(!) Hartlepool. The college venue was new, and even better than the old one, but the format was much the same - lots of layouts you've seen in the magazine with the added bonus of myself and Paul Chetter doing live demo versions of our columns.

As an added bonus for me this year, I got to drive a big van containing the crowd barriers. For a 4ft demo, I arrived in the biggest transport ever !

Anyway, all I did was sit behind my table and chat to people for two days. There was a lot of interest in the model on display, especially the Handyman Hall Railway which was especially popular since it worked. Or at least it did once I'd stripped down the loco to clean it up a bit. The Minitrains model uses an ingenious split chassis arrangement which is great unless you over-oil it at which point the electric juice stops flowing everywhere it should.

The little builders yard was as popular as ever and makes me think it's really about time I made another diorama like it. There were several other projects including a couple not yet seen in print so if you had a good look, you've enjoyed a sneak preview. Every model inspired questions from visitors and most were well handled. Hopefully a few people were inspired to go off and get their own hands dirty at the workbench. 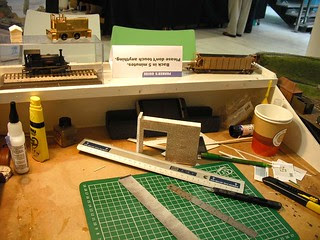 As far as making stuff went, I managed half a Scalescenes warehouse which amused the onlookers and moved another project a little closer to completion. That's not the point of the show though, it's all about the chatting. After all, I can make models at home but can't be on hand to offer advice of receive criticism unless I'm sat in the show.

As far as the layout went - Dunno, I didn't get out from behind the table for two days. All my photos were taken before the public arrived and often pre-switching on of the lights. Sorry about that. Trade was the same, it looked good but the only people to take money off me were the RNLI, but then you have to love the lifeboats.

Thanks very much if you dropped in to say hello. For those who were introduced to this blog by picking up a flyer, I hope you are enjoying it. If you are, tell your friends, if not, tell me !

Hornby Magazine Live photos on Flickr
Posted by Phil Parker at 6:00 AM

Thanks for taking time out to chat at Hartlepool. I thoroughly enjoyed the banter, and discovering your blog afterwards. I'm now a regular reader. One think I did resolve was to start trying to put something on my blog every day. By and large I'm succeeding.

It was nice to meet you too. I've now bookmarked your blog so look forward to interesting reading.