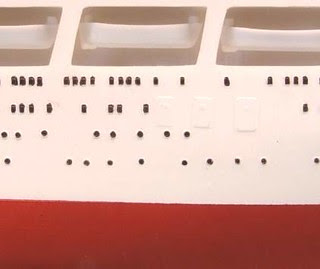 Looking at the photos of Canberra, under the waterline she is painted with the traditional red anti fouling paint. Airfix think this is topped with a black band and helpfully mould little ridges in to the hull side for both colours.

Since I'm following the pictures, only the top ridge is required but they are so fine, I ignored the bottom one. The fineness makes it interesting to follow with masking tape but after a bit of fiddling, I managed a smooth line even around the pointy bits.

Colour is supposed to be brick red but plainly isn't. I mixed up a special brew from red, brick red and a Revel reddy-brown colour. The job used more than expected so a second mix was required one the original paint cup was exhausted. A bit more red in the second one produced something that looks about right. I suspect the official images are brightened up a lot, either that or the paint was bought in a job lot from the Post Office.

Above eh waterline, porthole painting has started. The round ones are easy requiring only a drop of paint into the centre of the hole. Square windows, of which there are a lot, have been represented with raised mouldings. Well, except where they are on sloping parts where the well-defined top taper to nothing at the bottom.

As previously mentioned, I'm using Railmatch Weathered Black for these and it seems to be working. I reckon a matt black would be too stark against the famous white sides.

This fiddly work is slow as after a while tension in the fingers causes cramp and less than adequate brush control. The results are worth it though, bringing the model to life as you look along the sides.
Posted by Phil Parker at 6:00 AM