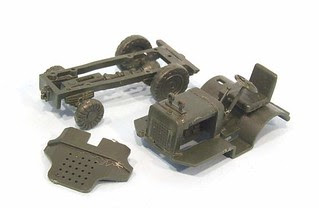 After last Monday's pink tractor photos, I was cleaning up my workbench a bit and found these bits in a "bits pot" hiding in the darkest recesses behind the turps jar. It had been very nearly under my nose for ages.

In amongst some resin boat bits, there were these items I'd completely forgotten about. Sadly, I can't remember where they came from but obviously a bomb tractor or similar. In the back of my mind, some sort of American kit lurks but that's the best I can do.

Obviously once upon a time I had the idea of turning it into something and shunting tractor would certainly seem a reasonable something to turn it in to. The job should be no harder than finishing assembly and adding a couple of whacking great buffer beams suitably attached with girders.

I don't think I'll be adding a motor - but I do have some ideas in that direction once I get a ruler out so watch this space.
Posted by Phil Parker at 6:00 AM