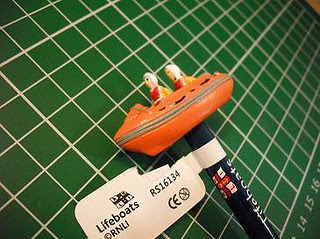 As I mentioned on Sunday, the only stand to take money off met at Hornby Magazine Live was the RNLI table. My first purchase was a rather nice pencil topped with a little D-class lifeboat.

I looked at the model and wondered what the scale was. Deciding that for the price it didn't matter, I purchased one and brought it back to my temporary workbench. I was in luck, the thing was a close to 4mm scale as made no difference. Maybe the boat was a little shrunk but the people were very close.

Pulling the top off the pencil, I tried it on the layout. It looked OK but sat rather high in the water - more on the surface than actually floating. No matter, slicing the rubbery plastic with a long knife blade (one of those snap-off versions fully extended) quickly brought it down to a more sensible level. At this point I left it on the "lake" and apart from being pushed around by a few kids, there it stayed. Well apart from the one who picked it up, clutched it to him and said "I'm just holding it" as though being protective of the little vessel.

Back at home there was one final job to do. As supplied, everything is a bit shiny but a quick squirt of Testors Dullcote quickly sorted this. I dropped the floatiness a couple of scale inches by running the model on a surform too, my original chopping hadn't resulted in a particularly flat underside but not it sites with hardly any gaps.

I don't think I'll glue the model down for the moment. I have an idea for some sort of mechanism to make it move but maybe one day. 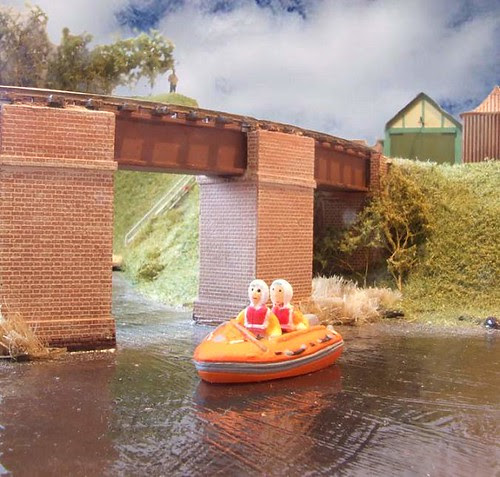 They sell them at the various RNLI shops around the coast on their own (ie without the pencil) - they do more 'scale looking', probably about 1/200 scale, all weather Lifeboats as well - Mersey, Tamar, Severn and Trent off the top of my head, as well as a generic Atlantic class.

I'm a Lifeboat fan and it's a real struggle finding small scale (1/72 or under) RNLI kits, almost been tempted to do some N gauge sized ones out of resin myself

They also sell them on their own, without the pencil, at the various RNLI Shops around the country, including more scale (around 1/250) but squashed in the length all-weather Lifeboats such as the Severn, Tamar, Mersey and Trent, and a generic looking Atlantic class. Wish there were more small scale (1/72 and under) RNLI Lifeboats available