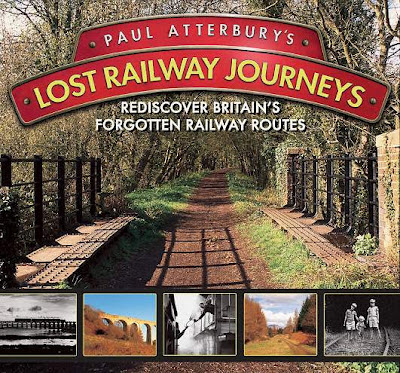 As a railway modeller, I have to say this is a bad book. A very, very, bad book.

The problem is that I already have lots of models I would like to build. Up and down the country, there are lines that would, in my opinion, be fantastic to reproduce in miniature. Having read this book, there are several more to be added to this list. Unless I live to be 120, this isn't a good thing.

To be fair, for someone with an interest in railways, this is a sad book. Paul Atterbury describes 36 railway lines spread all over the country, including the Isle of Wight but not the Isle of Man, that have closed. Each one is is presented as a short description surrounded by photographs, advertising material and old memorabilia. The photos are especially good since most are of real places, not just engines in the countryside and ooze atmosphere.

The ages of the pictures vary. It's not all steam engines, there is a single car DMU in rail blue which manages to be just as nostalgic. Mind you, remembering how long it is since such a train ran in that colour on a real railway, perhaps this isn't a surprise. Quality wise, some of the early colour photos are lacking but I couldn't argue with their inclusion or for replacement with a sharper black and white shot.

Should you wish to follow in the authors footsteps, then he provides plenty of photos showing the remains of the lines. My favorite is Emneth Station where a new conservatory ends with a Mk1 coach. Much of the time there is very little to be seen but occasionally a little infrastructure remains or the trackbed is now a route for walkers, cyclists and horse riders. The final chapter provides anyone inspired with a few pointers on getting out and discovering more.

For the modeller then, this is a source of inspiration. Since most of the lines closed are branches, they are just the sort of thing that we are looking for. Some, such as the Lytnton & Barnstaple or Wantage Tramway, have been done many time before even if they still make an entertaining read. Others are less well covered. Killin Junction to Loch Tay is one I knew a little of but the photo showing a Caledonian tank hauling a single coach has so much atmosphere, I'd love to recreate it on Flockburgh. Aldeburgh station looks eminently modellable too.

I said this is a sad book and it is. As you read through it, just how much railway has been lost. The reasons are there too see - most of those trains are carrying tiny numbers of passengers - but if some of the lines had survived a few more years, how many would now see numbers boosted by tourism ?

Find out more about "Lost Railway Journeys" at Hobby Warehouse

The Hobby Warehouse
Posted by Phil Parker at 6:00 AM