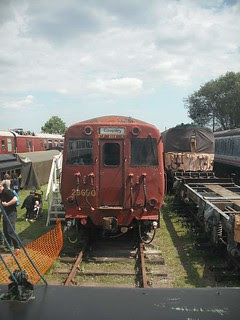 It's funny how you don't always visit attractions that are on your doorstep. I have been to Warwick Castle less than 5 times in my life and Shakespeare's birthplace a similar number, yet people trek around the world to have a poke around.

Just over ten miles away is the Electric Railway Museum and generally I've never given it a second thought. OK, so when a friend mentioned the movement of an APT power car to the site a couple of years ago it crossed my mind that I ought to go and have a look. Before that I recall driving by and being surprised to see trains parked next to the airport.

But last week, there was a bit in the local rag mentioning an open weekend. This made me think I really ought to make the tiny effort required. After all, entrance was free and the weather fine. I'd run out of excuses.

Pulling into the parking field I was greeted with a trip back in time. This is how the major preservation societies looked many years ago. Very little in the way of permanent buildings, other than a signal box and station waiting shelter, and lots of unrestored rolling stock.

Lines of it in fact. Pretty impressive for a site with no rail connection.

From the name, you'll guess that the main subject for preservation is the electric train. Most of the exhibits are ex-BR electric sets that spent their lives in the south of England. Apart from the ones from the north that is. 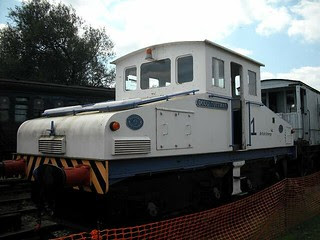 A couple of electric locos are also present. Two can run from banks of batteries in the noses fitted buy the original owners.

With no 3rd rail or overhead, the most practical motive power are a couple of diesels, one of which I built of model of a few years ago. The 88DS operated a short test train consisting of a crane (the one Triang made), match wagon and brake van. It was nice to see something turn a wheel and I think the volunteers got as much out of it as we punters did. 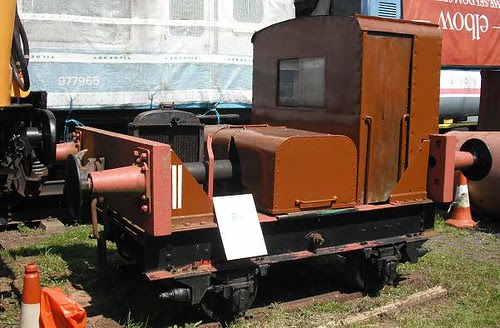 My favorite loco of course, was the odd one. In this case, a Hibberd petrol powered loco with a chequered history. It seems the engine was constructed from Motor Rail bits at the Hibberd site, many of which date back to WW1. I'm certainly seeing a lot of narrow gauge loco in there but this is a standard gauge item, part of a class of 4 supplied to the Ministry of Agriculture, Fisheries and Food for shunting grain silos. It would make a fascinating model if I had the time...

In the middle of the site is a very good museum with displays explaining electric power and the trains that use it. Someone has out a lot of effort into this and it deserves wider exposure as it's really very good. There's also a cafe and gift shop selling "stuff" including old railway magazines, both old and very old. The later will be well worth a proper look next time I visit.

That next trip might be interesting though as the museum may be on the move. Not far, just down the road with a bit of luck. It seems some developers have got the OK to build on the site but Coventry City Council have said that the railway must be re-housed before this can happen. Luckily, there are possibilities that the volunteers seem very happy with and one option that could be helpful to the nearby village too, so maybe, everyone can win this time.

In the meantime, if you like electric trains, then this is well worth a look.

My photos on Flickr.
Posted by Phil Parker at 6:00 AM