Dave asks: I have always admired your layout reminds me of the Liverpool docks in some ways. Can you tell me if you have time that is, what make of road vehicles you have used. 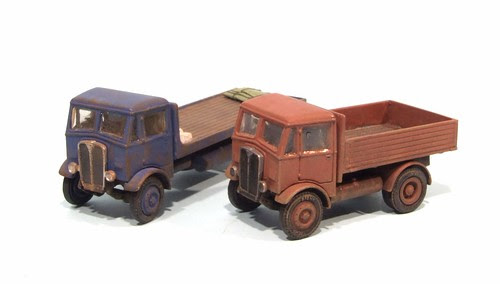 As it happens Dave, now is just the time to explain. Lots of secret magazine work means less time for my own model-making fun. It's either explain the Dock road vehicles or you lot might not have anything to distract you from work or the Olympics...

OK, I have to start by explaining that Melbridge Dock is a very old model railway layout. It first burst on to the scene in 1988 and has attended exhibitions up and down the country ever since. We still love it and so do visitors to shows. Since it goes in the back of the car, exhibition managers please note, everyone wins.

As far as the vehicles go, the age means that most were built before the current availability of accurate die cast models. If I wanted to fill my roadways, it had to be done the hard way. Kits were built or bashed and what RTR there was got itself modified.

Which brings me to today's subjects - a pair of AEC Mammouth lorries that started life as die cast EFE 8-wheelers.

The more observant will have noticed that neither has 8 wheels, nor a long wheelbase. Those EFE's were fantastic models and appeared in bright, shiny form on every train set in the country. Obviously, I couldn't just take the tings out of the box and use them - no, I discovered that if you drilled out the rivets underneath, the lorry returned to a pile of components.

If the metal bits found their way into some paint stripper, then some very nice castings were revealed. To make an even bigger difference, a little work with the junior hacksaw reduced the body and chassis lengths. After this, a coat of primer and some paint and my lorries were - different.

So unusual was it to perform this surgery that one of my early articles in the late, lamented Modelling Railways Illustrated, covered the building for the shortie brown lorry shown here. I don't know if I influenced anyone to have a go but if I did, it didn't do anything for the value of unmolested models as it's still diddly-squat.
Posted by Phil Parker at 6:00 AM

Oh how I love diecast vehicles. Must be something about my 4-year old self standing outside a local jeweller's, pushing a button, and watching their Corgi display rotate.

Diecast cars and trucks, to me are like little gems. If I had any money, I'd probably be a serious collector.

You've got yourself some lovely little AEC's.

FWIW most lorry cabs were very similar in the 1950s.
There is (was?) a company producing 00 scale bus kits and also sold the radiators separately. An easy way to broaden the range.

The name Pirate comes to mind.

True - there are plenty of aftermarket bits for model road vehciles, the name Pirate comes to my mind too. Look out for later episodes in this series for more...