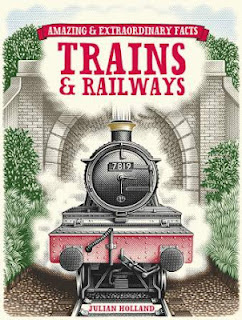 Did you know that to earn enough money for a single pencil, the Midland Railway had to haul a bag of maize for ten miles ? Or that to earn a fishplate took the haulage of a ton of salt for 16 miles ?

And when I discovered that one of the least used stations in the UK can be found in Warwickshire, I couldn't resist immediately looking it up on my 'phone to see how easy it would be for me to visit.

Which is a good thing. A book like this should allow you to dip in and out as you feel like it. Think a buffet rather than full sit down meal and you get the idea.

Like a buffet, it shares the advantage that if you don't like something, you can ignore it. In my case this is the slimy stuff at a Chinese banquet or the reminiscences of author Julian Holland and his steam powered journeys as a young train spotter.

Being the third book in the series, it's preceded by Amazing & Extraordinary Railway Facts and More Amazing & Extraordinary Railway Facts, I wondered as I ploughed through the text, if the supply of  exciting facts was running dry. Some of the stuff is absolutely fascinating but other pages were a bit dry. However, this is very much my opinion and I'm not really a serious railway enthusiast. Therefore the background and routes to named trains left me cold whereas the Midland railway list mentioned above is a gem.

If you are relatively new to the subject then the short histories of the Glasgow Subway, Grimsby & Immingham Tramway and Bullied Leader (nicknamed the Chinese Laundry) are useful tasters. The later is a subject I've read several books on and can't disagree with the facts on the page.

For modellers, this book could be a useful source of inspiration for new projects. With a bias towards the pre-grouping it could push you in directions that you hadn't considered, I quite fancy a reservoir railway myself. For enthusiasts proper, it will either annoy the heck out of you because you know everything and more, or delight you because you found out something you didn't know.

More on this book from the Hobby Warehouse

The full range of railway books at the Hobby Warehouse
Posted by Phil Parker at 6:00 AM