An interesting video from Lawrie's Mechanical Marvels. Why has trainspotting evolved from something most boys enjoyed, to an activity that makes you a social pariah?

Lawrie argues that it's down to the dullness of the modern railway, and I can certainly see something in this. When all trains were fronted by a locomotive, there was certainly more glamour, but is that enough?

I wonder if there is an element of people not being as interested in the mechanical side. Once, we celebrated engineering achievement, now, as much of the HS2 coverage shows, the only thing we do is moan about it. Now, kids want to be "influencers", in the 1980s, they wanted to be Yuppies. People don't aspire to do anything hands-on and practical.

What do you think? Meetings don't always need to take place in meeting rooms. Keen to pin down some news for Garden Rail, I headed a couple of miles away to a local garden railway steam-up, on a Thursday afternoon. In my defence, I'd pulled a muscle in my back and sitting at the computer wasn't comfortable.

Anyway, there was plenty to see, such as an old friends' Talyllyn Railway train. Initially hauled by No.2, he then hooked up No.1, which suprisingly (to me) struggled a bit on the curves with the coaches.

Alongside it is a Riverdale Locomotives "Irene" which is coal fired. It looked stunning and ran really well. Coal firing is very fashionable, and the model certainly had the right smell, an important part of the steam loco experience. Watching it trot around at a very sensible pace with it's train was cracking. Riverdale are a new name to me, so the trip was also useful for research. 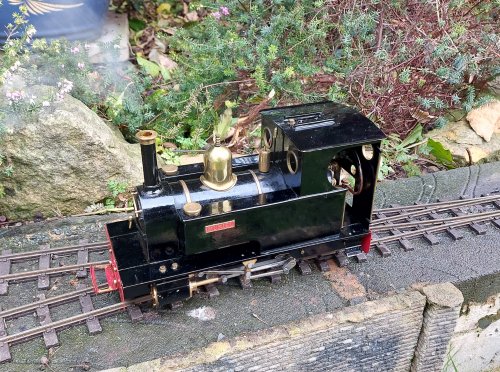 I'd brought my Merlin Mayflower along. The line disapears behind some hedges at one point and I was nervous about letting the manually conttolled Peckett loose. The loco performed perfectly - but reminded me I really need to replace the buffer beams with something that doesn't involve LGB couplers, so I can haul a train. There's plenty of power on offer, and I want to give the model a workout. 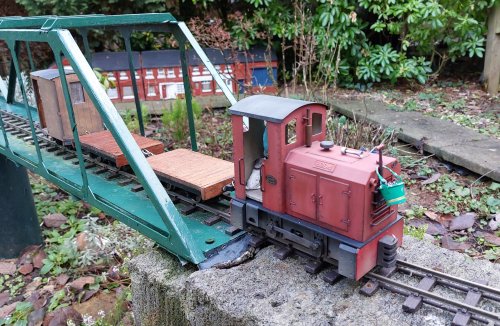 Also on show is this lovely Roundhouse Bulldog. I've not seen a painted and weathered example before as far as I know, and the model does look rather special with a less than toy-like paint job. 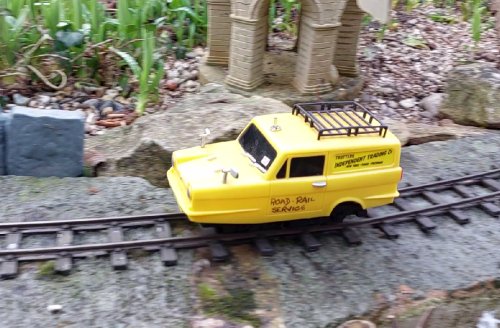 Finally, a bit of fun with a battery-electric Trotters van. I don't know where the body came from, but I rather fancy doing a similar conversion myself! 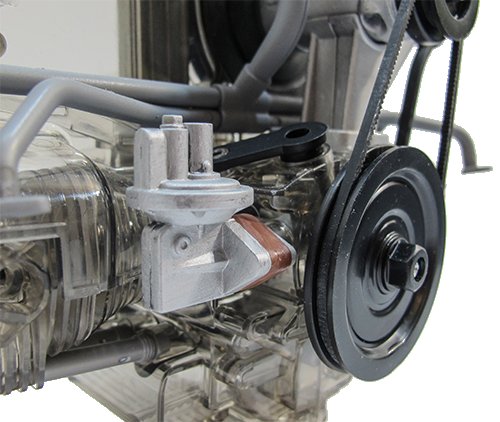 Now this is a bit different. Because this is an early engine, the fuel pump is mounted on the side. Later versions, such as the one in my '73 Beetle, are on the top of the case, on the right of the distributor as you look through the back hatch.

I know this, because many years ago, I planned to tour Kent in my bug. Heading down a quiet, and sunny M40, suddenly I had no power. Coasting to the hard shoulder, I pulled up, walked to an emergency phone (no mobiles in theose days) and than waited for the RAC to arrive. I still see the tree at that spot when I head south to this day.

Once the van arrived, the diagnosis was lack of fuel, and looking at the pump, the pivot in the base was sticking out. Inside, there is a rocker operated by a rod coming out of the engine to bear on one end. The other is connected to the diaphram inside the pump, and that's the bit that moved fuel around.

Back home, I quickly pushed the pivot into place and all was well. But I decided againast continuing the trip.

This was wise, as the same thing happend on the way back from work a few weeks later. Better prepeared, I nipped around the back of the car, shoved the pivot back in and all was well. Which is what I told the very attractive blonde woman who pulled up in a red Beetle to see if all was well. What a time to do a quick fix - she was gone again in a flash, when  long chat as I diagnosed the problem would have been very pleasent...

Eventually, I worked out that there should be a circlip on each end of the pivot. Once replaced, the problem never occured again.

The model version is a two-part plastic moulding that snaps together and then pushes into the crank case. I painted it silver (it looks better in real life) and the Bakealite spacer, a rust colour which looks about right. 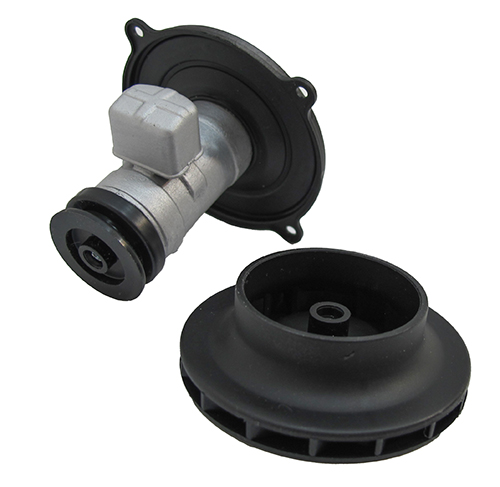 If there's one technical thing people know about the VW Beetle, it's that the engine is air cooled. In practice, this means that air is blown through an oil cooler hidden in the fan shroud, and over the fins on th side of the cylinders.

Th fan is attached to the dynamo, or alternator, depending on the year of the engine, and driven by the fan belt. That makes the belt a very vital bit of kit, and if the charging light comes on on the dash, the clever driver knows to pull over and check all is well. Failure to do so will see the engine temperature rise rapidly, and a valve on the number 3 cyclinder, which gets a little less air than the rest, exit via the side of the crank case.

On the model, the fan and dynamo (This is an early engine) look just like the real things. You even have a voltage regulator sat on top, held in place by tight fitting plastic, not screws. 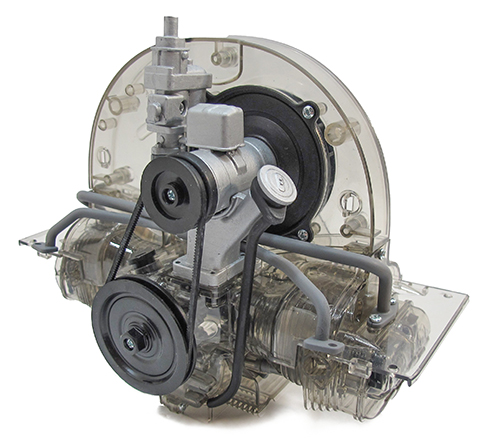 All this sits on top of a stand with a oil filler on the side. All this has been painted as there's nothing to see and I think the contrast between black and silver bits looks rather nice. For some reason, the silver, a Humbrol metalcote colour, seems to dry incredibly fast. Over a coat of primer, I was easily able to put the required couple of coats on the parts in an evening.

Posted by Phil Parker at 5:30 AM No comments: 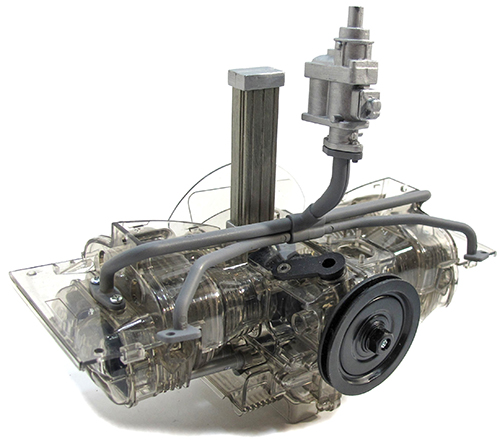 I've mentioned in the past my aversion to self-coloured plastic parts in kits. Mould them any colour you like, but I still prefer paint on the completed model. It's just looks better to me.

The VW engine is supposed to be screwed together, the only tools required being some clippers to remove parts from the sprue, and a cross head screwdriver. No paint.

Anyway, I want my model to look a bit more realistic, and so the manifold and exhaust parts have been given a spray of grey primer, which looks the part to me. The carb and end of the oil cooler are a random silver, possibly aluminium, from the paint drawer, and the body of the coller silver from the Liquid Metal range. This should be finned, but hopefully simply painting it will look OK through the clear fanhousing.

It's difficult to decide how much to paint, but I'm working on the basis that if it's coloured plastic, then I'll look at a better colour. I do wonder if someone is going to produce a more detailed carb though. Possibly a job for 3D printing.