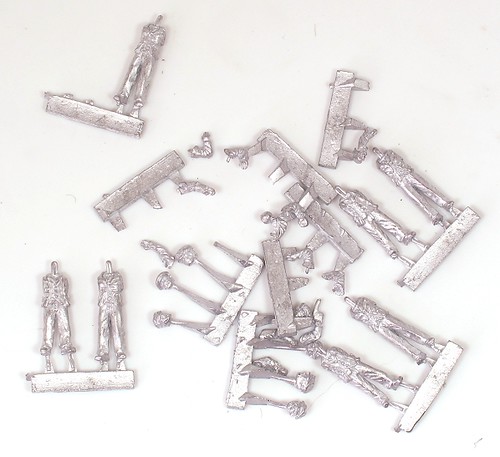 No, not a captain for my Bantam Tugboat, this is a figure from a new range retailed by Ken Clarke.

Unlike most 4mm scale figures, these crew arrive as a selection of components allowing the builder to tailor the figure to fit a location, such as a locomotive cab.

The Bantam bits refers to the figure size - they are actually sculpted to HO (3.5mm:1foot) scale and so a bit on the small size but as people come in all shapes, some short ones are fine on a layout.

Many loco cabs seem to offer limited headroom anyway so these will fit in much more easily without foot amputation, something I have been forced to resort to in the past. 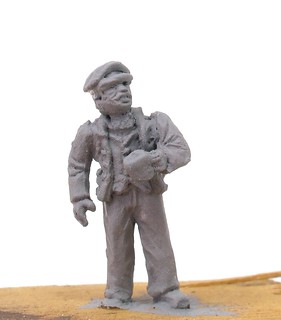 Each figure consists of a body, 2 arms and a head. Putting these bits together is incredibly fiddly. The neck needs to be drilled out to accept the stalk under the head (not quite a neck but near enough) and the arm sockets also benefit from a little enlargement.

I initially tried Zap superglue but found it too runny to grab the bits. A tube of gel superglue worked OK though. In cruel enlargement, my little ma doesn't look great but in real life he'll be OK. I expect my assembly technique will improve. These are tiny parts and difficult to hold while not fixing yourself to them with the adhesive.

A coat of Humbrol acrylic primer would probably have been better applied by spray too. Next time.
Posted by Phil Parker at 5:30 AM

Could I add that six pages of photos, information and prices about these figures can be had from me on kennclark@btinternet.com