Casting walls for the garden railway 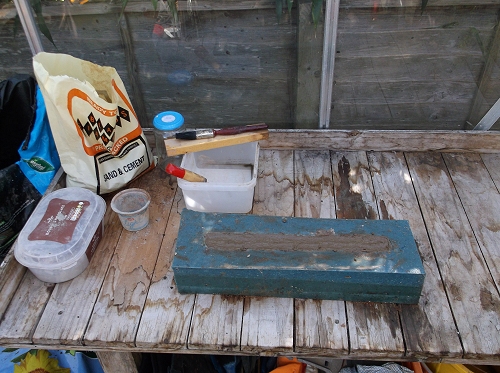 It's always been the plan for our garden railway to surround the track with low walls. These will neaten the edges, keep plants back a bit and stop the ballast running everywhere. The trouble, low wall sections are difficult to come by.

I found a couple of examples, one from a supplier who promptly disappeared, and another in a bundle of heavy concrete pieces under a second hand stall.

After lugging the later home, I set about trying to track the maker down. The walls were perfect, we just needed lots more. Sadly, when I did, they had also stopped making them.

However, they did agree that I could make some copies. For my own use, but enough to do the job required.

So, we bought some Gelflex Blue, made a simple set of wooden walls, heated the gel up on the hob in a cheap pan bought for the job, and made a mould. 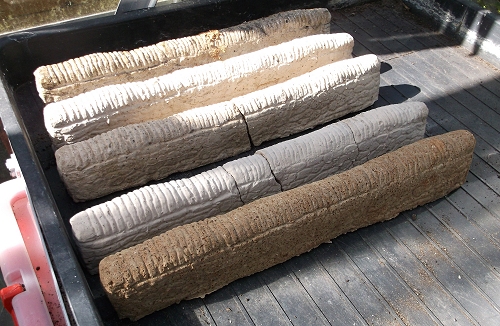 The first lesson is that you need more gel than you think, but once it has cooled, the resulting mould works really well.

My dad set himself up in the greenhouse over the summer and every morning, made a concrete mix up and cast another section. The following morning, he'd turn out the previous section, mix another and repeat. For over a month.

We cast in excess of 40 wall piece from the mould and it's still going strong. Occasionally, some release was sprayed in but mostly we didn't worry too much about looking after it. The gel can be re-melted to make a new mould, but we didn't need to do that.

After a few days, the correct mix of water and concrete was established and we got better at turning out walls without breaking. As it happens, some short versions would be useful, but mostly they came out whole.

You can buy Gelflex Blue from Hobby's.

As for the manufacturer allowing you to make copies for personal use, I'm guessing that they don't think the market for them is currently large enough to justify them making and selling lots of batches.

I might be wrong - it's just a gut feeling.

As for all this work you're doing on your garden railway, I hope you're taking photos - possibly even shooting short videos using your camera.

If you're having to do this stuff on your line, I suspect that some of your readers are likely to be facing the same jobs.

I could imagine some of them finding articles or footage about this stuff rather useful - and I don't think most of them would be too worried if the picture quality or lighting were less than perfect.

Just a thought - I'm sure somebody with be along soon with better ideas.