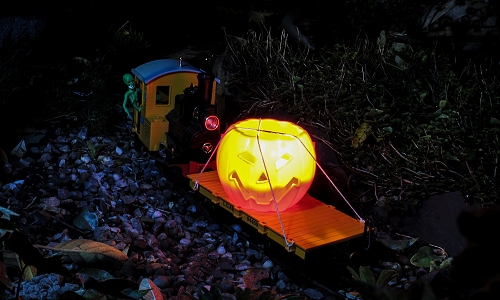 Inspired by a window of Danish tat shop Flying Tiger, I decided that Garden Rail should have a couple of spooky images for Halloween.

A giant pumpkin loaded on a flat wagon seemed like a good plan , especially as such a plastic vegetable could be bought for a couple of quid.

It turns out that spending the money was the easy bit. While the pumpkin included a light, this only stayed on for a few seconds. And made a noise. 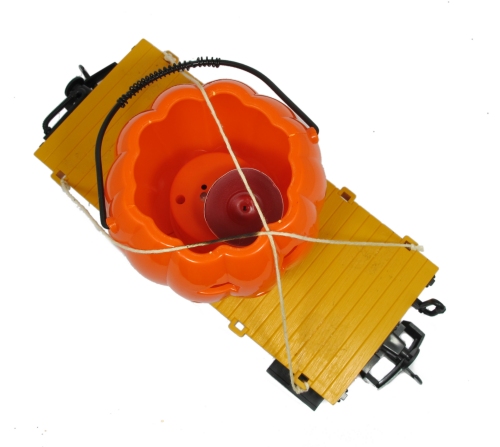 The solution was a real tea-light candle Blu-Tacked inside, not too near the plastic. As you can see, during the 15 second exposure, the "rope" holding it in place got a bit singed, but nothing caught fire.

With the pumpkin lit up, I needed a loco and a driver. An LGB 04-0 would do, and I wedged a posable rubber skeleton into the cap, also from FT. 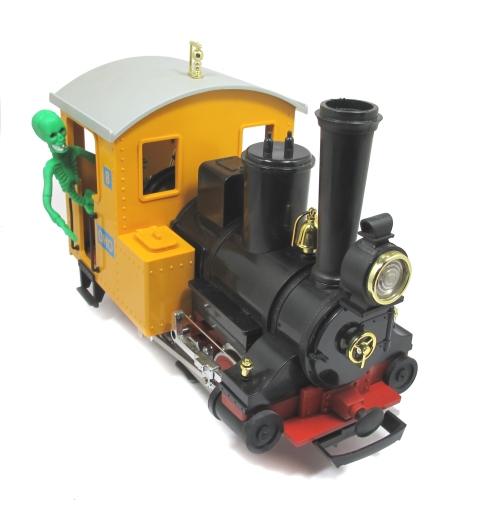 On the track, I tried a few shots. Purely by accident, I hit upon the idea of illuminating the scene with a wave of an LED torch for a few seconds while the shutter was open. This worked really well, the blueish light looking just like moonlight and allowing you to see the models a bit better while leaving shadows that I could darken on the computer.

A lot of work for one silly image, but it's things like this that make my job fun.

It is all a bit of fun, and reminds us that though Phil! Neat trick with the torch, it does look like moonlight.

I don't know why - but your "1 candela" jack-o'-lantern reminds me of some RTR carriages, after they'd been fitted with lighting kits.

A few years back, I even considered posting photos of a YMRV Mk 1, with "bargain shop" LED lightbars temporarily held in place, to allow for a series of experiments in how to deal with "light bleed".

For some reason, I thought that something like this could have been fun around Halloween - but I never actually got the chance to throw this little lot together.

If anyone really wanted to put together a simple exhibition demo of something like this, it probably wouldn't be too difficult to do - using a large shoebox (minus lid) to block out background light and provide contrast.

OK - this might sound a bit like a "cheap and nasty" take on your cake box challenge - but I was actually thinking about this well before you started opening boxes.

Of course, I haven't got a clue whether any of this stuff would have interested anyone other than me ... .