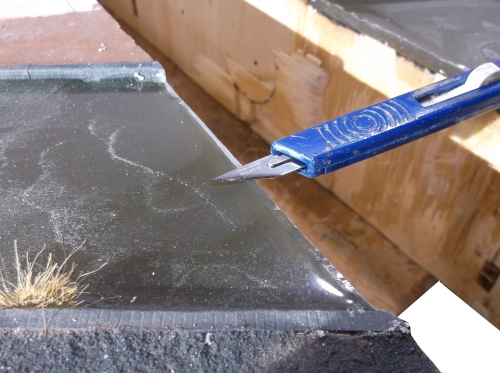 Along the edge of the baseboard joint, there is a meniscus curve in the canal. I've been putting off dealing with it but eventually had to do something.

The Woodland Scenics Deep Pour resin is pretty solid, so with no better ideas, I attacked it with a sharp knife, sliding the blade along, trying to cut slivers of "water" away.

This sort of worked but eventually I resorted to scraping the blade sideways in the same way I remove mould lines on a plastic kit. This worked, but the slightly rough surface (above the blade in the photo) didn't look great. Not as bad as I feared though.

A new blade and back to the slicing - the results aren't bad. Not perfect, but then I didn't expect that. The resin is a little rubbery, so not amenable to polishing with abrasive. The result doesn't stand out too much though. No worse than a baseboard joint anyway, and I still plan a pipe bridge to hide it further.

That sort of location is also where duckweed and the inland equivalent of flotsam might accumulate, which could also disguise it.

My memories of cruising on the BCN, even into the early nineties, often involved close encounters with serious rubbish. On one occasion we were nearly capsized by collision with a submerged car, which was truly frightening.

A couple of years ago I was watching a mat cutter in an art shop. He was using a device with blades the size of razor blades and changing them after every cut or set of cuts. The blades were razor blade size but one size was flat all the way so that it cut even.
After talking to him, he gave me a box of slightly used blades that were still perfectly sharp to me.
Need to be careful: from the wrong side, the sharp edge looks like the pushing surface.