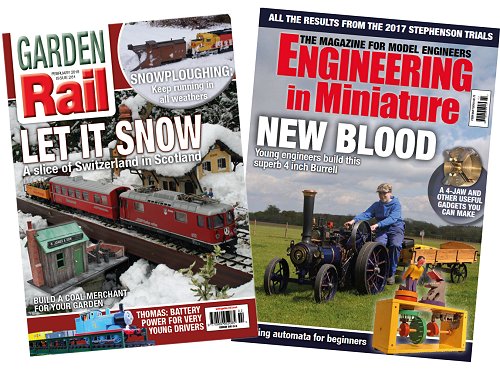 Garden Rail is looking back tot he snowy weather just before Christmas to see how those whose layouts are affected by great big dollops of the white stuff deal with it.

Being a magazine covering a wide range of scale and gauges can be challenging. How small is too small? Martin R Wicks explains to readers how the O gauge world has changed - and I had great fun categorising this as "Smaller scales" - which to most of the readership it is. What a different world from BRM where many people aspire to O but don't have space!

There's plenty of building too including Si Harris showing how to make plastic sheet look like wood. It's one of those cross-scale techniques that I'm keen to include. After all, there needs to be something for everyone and there is a lot to appreciate in every branch of the garden hobby.

Engineering in Miniature is all about bringing new blood into the hobby. People are always moaning that the hobby is full of old folks - although to be fair, this recently happened as the person saying it swung an arm pointing at a room about half full of families with kids, so I guess sometimes it's what you want to believe.


Anyway, the National Traction Engine Club founded The Steam Apprentice Club years ago to help solve this problem and we report on their latest project - a 4in traction engine.


Solomon Johnson, Northern Association of Model Engineers Junior Engineer of the year 2016 writes the young engineers column and Dave Rowe, a name many railway modellers will remember from the 1970s and 80s, shows us how to build a simple automata to plant the seed of "making" into the grandchildren.

Talking of new blood, this also sees my last issue of EiM. 6 months of editing both magazines at the same time has been more than a challenge so I'm handing over the chair to Andrew Charman. No rest for me though, I've several new BRM projects on the horizon, more on these later in the year.
Posted by Phil Parker at 1:12 PM

I'm glad to read that Dave Rowe is still with us. His "Architectural Modelling in 4mm" (Wild Swan) has pictures of many delightful models in various stages of construction. Very useful and inspiring. But by the time I became interested in modelling, he seemed to have disappeared from the scene.