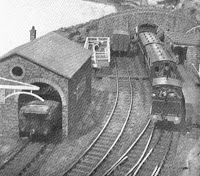 It's sad to have to start the new year with news of the passing of one of the railway modelling greats but I understand that the Rev. Peter Denny passed away on 28th December.

Denny's name and his layout, Buckingham, probably won't mean a lot to modern modellers but in the late 40's through to the 70's both made regular appearances in the model railway press. Denny was a pioneer. He built layouts that were models of a real railway complete with a scenic setting in the days and EM gauge track when most people still fumbled around with track loosely laid on baseboards full to bursting with railway. You believed in the model even though it was freelance.

I always enjoyed his articles in old modelling magazines. He used to tell you how to make everything - something particularly appealing to cash strapped youngster ! Of course in those days necessity was the mother of invention so model making involved turning raw materials into the finished product. Denny, as far as I can tell, didn't compromise. He had a plan and stuck to it.

This brings me to another valuable point. Denny's strength was that he built a layout. One layout. Not lots of different layout, just the one. OK it went through several phases and was built at least 3 times as well as being modified to suit various vicarages but Denny was single minded. This is how you make something great.

Of course you could argue that when he started modelling a lot of the things being modelled were still to be seen. I love his articles on gas works but have never actually seen a provincial set up like he describes. Likewise even though the model was set before the grouping, much of the infrastructure would have been visible with only minor changes to a small boy who had a real interest in the subject.

Finally I have to mention a couple of my favorite articles. The first was the portable workshop. Designed to be easily moved to and from the kitchen table, it still incorporated holders for all the important tools, a lamp, vice and sockets for an ancient electric soldering iron. It certainly inspired me when I built my workbench.

The other was the "Automatic Crispin". Buckingham required several operators, usually the junior Dennys. When Crispin was no longer available, he was replaced with a machine capable of releasing trains and responding to bell codes. When I heard about this wonderful contraption I
trawled the old volumes at our railway club to no avail. It was only once the Wild Swan books on the line appeared I finally saw it and gleaned just little of the working of this primitive computer. Sadly these books are now out of print but still turn up on second hand stalls at exhibitions and are well worth acquiring if you are the sort of modeller who likes making things.

If you want to get to know the man through his writings, there is a handy list here.
Posted by Phil Parker at 5:46 AM