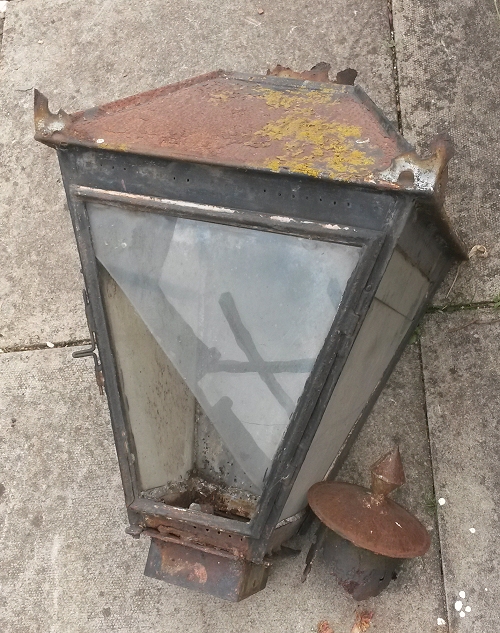 After a slightly random conversation at the model boat club, I find myself custodian of this GWR station lamp. The previous owner had inherited it and didn't want to throw it away. He had no desire to  own a rusty relic though - so passing it on to me for free solved all his problems.

I can't resist a bit of railwayana but this isn't without it's issues. The main one being that quite a lot of it is composed of rust. The frame around the glass is OK, but both the bottom and top are basically knackered.

Sensible people would throw this away - or at least find some other numptie to pass it on to.

I'm not sure what to do. Replacing all the rust wouldn't leave much of the original. There's little metal to weld to so replacing rust with steel isn't likely. My initial thoughts involve some automotive glue. Maybe if I stabalise the rust, I can glue metal inside the rotten bits.

Dunno. For the moment it's in store while I think. Suggestions welcomed.

How much of 'preserved' locomotives such as 'Flying Scotsman' or 'Talyllyn' are original metal?

Use tinplate and plumbers solder to repair, I have a couple of early railway guards
lamps and they are soldered construction and not welded, a bit like constructing an '0' gauge Leonister loco kit. Hopt that helps, Tom

Good thinking Anonymous - I'd forgotted that it would be soldered rather than welded. Still not sure where I'll find metal rather than rust to solder to, but I'll have a look sometime.

What is "Automotive Glue" - is it some sort of metal to metal glue ? I could do with some of that to mend my lawnmower. I have been able to glue bits of greenhouse (Al to Al) using superglue. What are the trade names for metal glue ?

According to people on a VW van forum (type2.com), modern cars are often glued together. That's as much as I know at the moment but it might be worth digging around on the web for more details. Sadly I can't recall any product names.