A big, red locomotive for the garden 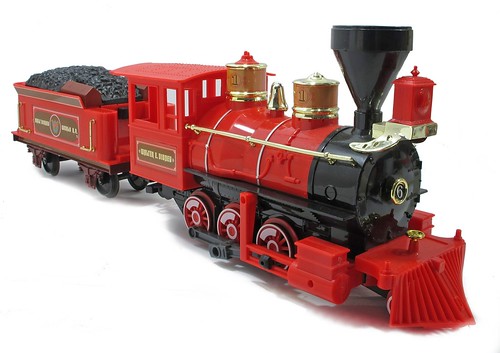 There is a little method in my madness. The loco does come with waggly bits on the outside. Overall, it's not a bad looking thing if you ignore the gold. And red. There are a sensible number of wheels including the pony ones at the front. It runs on 45mm gauge track. 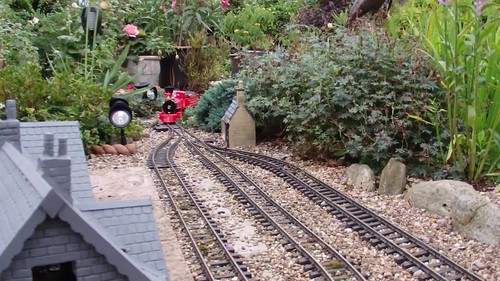 Oh, and it makes noises. And smoke if I top up the reservoir in the chimney with baby oil. The light on the front works too.

OK, it's a bit kitsch, but I might have a use for just such a loco later in the year, or perhaps next year. Long term, I think some basic detailing work, sorting out the tender chassis which I don't like, LGB couplings and a repaint will make for a fun beast. Radio control would be nice too, but nothing expensive.

Oddly, a few days after I got this back home, an article arrived for Garden Rail which included photos of one of these on the authors layout. I'm not the only one!
Posted by Phil Parker at 5:30 AM

The colour isnt totally off, being quite basic for the 19th century.

I ran mine (or is it my wife's?) on Mike Walton's Formby Gorge. A couple of problems as the loading gauge seems to be bigger than what usually runs there.
The set it came with includes 2 passenger cars and figures of crew and passenger, plus a loop of plastic track.
Conductor Goofy is now checking trains at the Grizzly Flats station.