Filling in for Suzi Perry 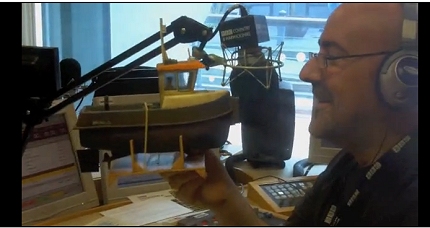 I hate the Coventry ring road. Whoever thought that putting exists and entrances in the same tiny gaps in the surrounding concrete wall of death was obviously playing a practical joke. Or they were a sadist. Or hate the people of Coventry. Whatever, when I go to central Cov, it's the train for me.

On Friday, the train was unusually full of well dressed people, especially women in hats and fascinators (and I do know the difference). Then I remembered hearing something on the news about it being Ladies Day at Royal Ascot. This was a bit of a surprise - I hadn't expected that the sort of people who eye up the royal enclosure with envy would be seen on anything as common as public transport. Not to worry, I found a seat and read my paper.

The trip to Coventry was due to being invited on to the Shane O'Conner breakfast show on BBC CWR. This was my second visit as I'd been on in January to talk toy trains. As requested, I turned up at the studio by 8:30am and was directed to wait in the corridor that also serves as a production area. A mug of super-hot BBC teas was profered and accepted. Might as well get a bit of licence fee back !

The team (both of them) seemed to be co-ordinating some stuff about Ascot. They had a reported with a group of ladies boarding a coach to the races. By the sound of it, they'd hit the champers early and would be in high spirits buy the time they arrived. There were also several attempts to get Suzi Perry to answer her phone to do a planned insert talking fashion'n'stuff. These got a bit frantic, messages were left and not returned. This left a gap in the programme.

I was due on at 7 minutes to 9. The day before this had been quarter too but schedules change. However I was a bit more hopeful that I might get a bit more if they needed more material. As it was about 8:45, Shane came out of the studio, recognised me and I was ushered in.

The results were videoed for your entertainment. I think it went well. The important phone number went out and I made a few jokes. Still look like a prat but it's radio, so who cares ?

Go on - Watch the video in all its glory.

Does anyone have any jobs going for a top radio celebrity such as myself ?
Posted by Phil Parker at 1:43 AM