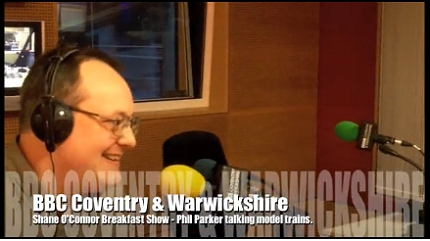 Since I volunteered to look after the media stuff for the exhibition I knocked out a press release to send around. Then I sent it to a friend who does PR professionally and she re-wrote it into something that would appeal to real people and not anoraks. This was duly dispatched to any organisation I could find an e-mail address for.

Within 3 hours I'd had a trio of offers of radio interviews plus the local paper wanting to send a photographer. That shows what a difference someone who knows about doing this properly can make. One station knew Pete Waterman was coming and wanted him, another was the religious slot on Sunday and I manged to find a suitable retired vicar to cover this. The final one was for me to do.

Now I am not unfamiliar with radio work. 10 years of hospital radio plus a few appearances on the real thing mean I can just about speak without sounding completely stupid. So it was I ended up in Radio CWR at 8:40 in the morning, ready to appear on the breakfast show.

The interview went pretty well apart from me getting the month wrong at the end. I was keen to show the breadth of the hobby rather than just banging on about playing trains. We had some photos of Clarendon and a couple of models for the presenter, who is apparently an enthusiast although he doesn't mention it, to look at.

They even filmed it for the programmes Facebook page.

So, you can go and see how it went for yourself by following this link.

Please get in touch with job offers !
Posted by Phil Parker at 8:45 AM

So video didnt kill the radio star then ;)