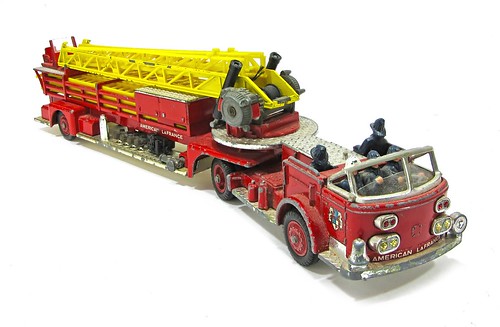 When I was 5 or 6, I remember going over to Johnathan Simmonds house to play. I probably took some cars and because of this, we spent time perusing the Corgi car catalogue. The model that stuck in my mind was the magnificent La France fire engine.

I don't really know why.I've never been particularly into them. I never played firemen as far as I remember. Something to do with being afraid of heights maybe.

We had a friend who was a fireman, it's pertly his fault that I'm into model railways. Since he is American, I could have wondered if it was the sort of thing Earl drove. Mostly though, I think it just looked magnificent and bit exotic. Being the biggest toy in the book helped a bit too.

The trouble was, La France was too expensive for me. Maybe if I'd really wanted it as a major Christmas present I'd have been granted my wish, but there was Lego and I liked that a lot more.

I've not given much through to the model since. Maybe I looked at them second hand (£80 for a boxed version) and wondered it I should scratch that childhood itch. Corgi even re-issued the model a few years go, which spoilt things slightly, I'd want a 1970s one. They were proper. 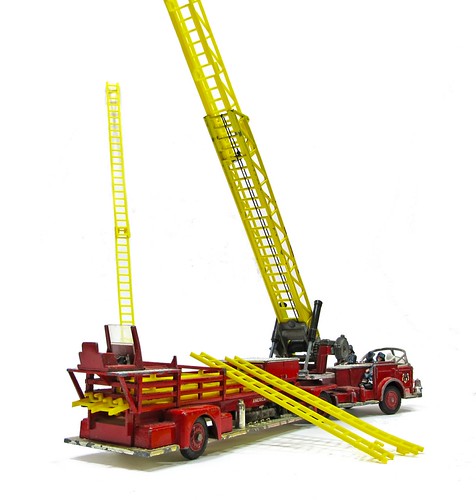 Anyway, there I was at a toy fair the other day and on the last stall I visited, there was a "play worn" model. For £4.50. I hesitated and the decided that for little more than the price of a pint, I might as well.

I'm glad I did. The model needs a new windscreen, but it has all its tyres and most importantly, figures. The neat mechanism that winds the ladder skyward still works. The raising one isn't quite so healthy, but I can live with this.

The moral of the story is, wait long enough and whatever it is you are looking for will appear at the price you want to pay. Mind you, 42 years is a long wait!

So, today's question: What was the childhood toy you coveted but never owned? And would you be tempted to buy it today?

For me it was the Lego Technic 8880, black supercar.... Even today they command a high price, but if i found one under £20, I'd have it in a heartbeat.

I so wanted on of these as a kid. A friend Nigel used to “let me watch” him play with his..

The Britains Toys Long Tom 155mm gun, and any of the Solido Tanks that had proper metal link tracks...

I used to see them on shopping trips with my mother to Bon Marche in Gloucester in the 1970s... used to get there by trains that took the Tuffley Loop and dropped us at Eastgate Station. All long long gone of course

Oh I wanted one of those too! My dad was a retained firefighter and I now appreciate the Dennis Ulster for what it was - a gem - but these things were a league apart!