In the darker recessed of eBay, I recently found a Scalecraft kit dating from a time before postcodes judging from the return slip in the box. Scalecraft produced a range of snap-together motorised models designed for kids rather than "serious" enthusiasts, but with undeniable charm. My collection includes and E-Type Jag and Traction Engine.

As a model boat fan, as soon as I knew a working rowing boat had been produced, I wanted one of those as well. Nearly enough to pay proper money for it (nearly...)

Anyway, a kit turned up and I bagged it for not too much cash. A few days later it arrived in the post. 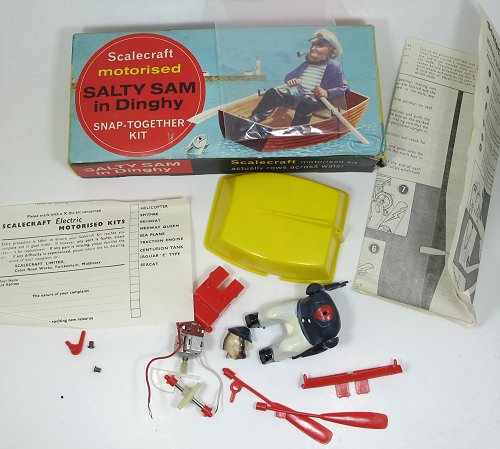 Like all Scalecraft models, the plastic is too soft to "snap" together. It's a sort of polythene rather than styrene at a guess. Perfectly sound though and after a few minutes work, Sam was assembled.

Wiring up was tricky as I lost one of the top-hat style connectors, but I fashioned a replacement from a bit of brass tube. Power is from an AA battery stored under our sailors legs. 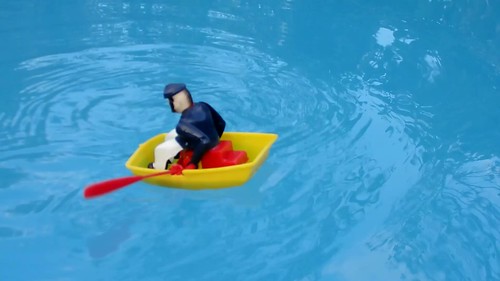 To be honest, it's pretty good. Nice and stable too, although I did manage to sink him when the motor stopped and I poked the wrong way trying to brink him to the edge of the pool. It actually worked better after the dunking! Perhaps Sam got the message...

I love those Scalecraft models

I also love those Scalecraft models, and so I now find that I have accumulated - equally from the dim recess' of eBay in the US, Australia, Germany, Belgium and France - that I have some duplicates, including a spare Salty Sam ...
And yes, Phil is quite right, Salty Sam does actually row.
So if anyone is tempted to cross my palm with a suitable amount of silver, Sam might make his way back from Australia to ....

1. Swaps? Spares? As a Scalecraft collector, rather than just selling my spare Salty Sam I would also be interested in any swaps or spares.
2. 3D-printed spares? The polythene of which the Scalecraft kits were made is prone to degradation if left exposed to sunlight for years; One of my Cessna floatplanes has been badly so affected. Also the kits have often lost parts over the years. Has any one managed to 3D scan Scalecraft parts so as to 3D-print replacements?


PS TI have to winge that he pictures used in "Prove that you're not a robot" often have a terrible lack of contrast (and yes, my eyesight IS better than adequate!)