The return of the Handyman Hall Railway 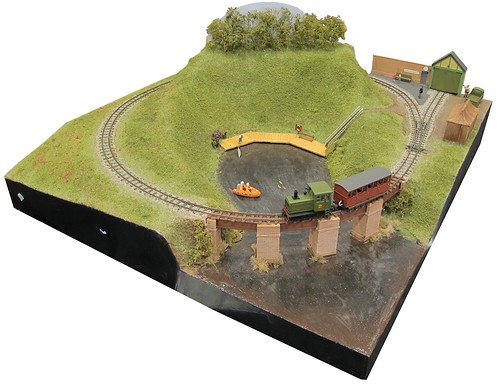 For the Leamington Show, I dug The Handyman Hall railway out of storage. Despite not having seen the light of day for at least 5 years, it is looking pretty good. One loose figure and some discoloured varnish were all the problems found.

The figure was quickly glued in place, the varnish issue ignored (I pretend it's a running water effect if asked) and after a quick track clean, it was good to go. Testing showed that an L&B loco didn't have a chance on the tight curves, but any of my 4-wheel models were fine. 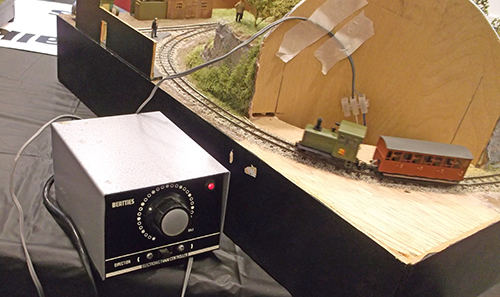 Power came from a  Beatties controller which apart from a slightly sloppy direction switch, works perfectly still. Plenty of God's own DC available all weekend. 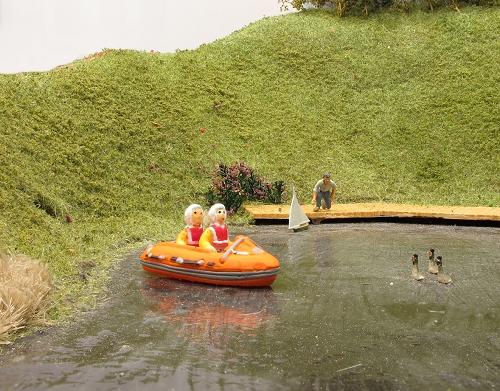 An amusing moment came when a youngster picked me up on the rescue boat. He identified an RNLI D Class lifeboat and pointed out it would only be used offshore. I excused myself by saying it was a lifeboat day and they were demonstrating it.

Actually, the model is a pencil topper which isn't a bad match for 4mm scale figures, if a little short. It's bright orange though, so I like it.
Posted by Phil Parker at 5:30 AM

Rivet Counters are getting younger !

Hi Phil. I absolutely LOVE your layout. I'm planning on building a 009 in a metal flight case for my son. He already has a 00 but that is purposefully more of a plaything. Your layout is a great inspiration thought there is no way I'll match that level of modelling. My son won't mind though. Realism is not a great concern at the age of 6. Anyway, quite wonderful!