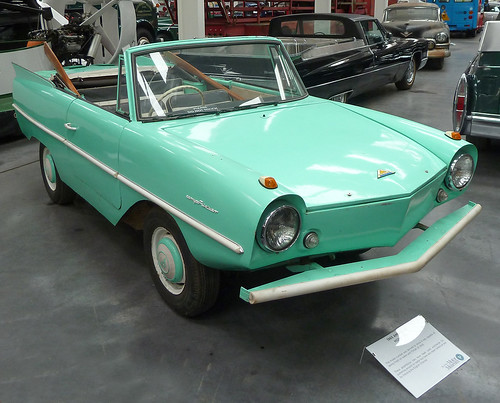 Nope. This is an Amphicar. 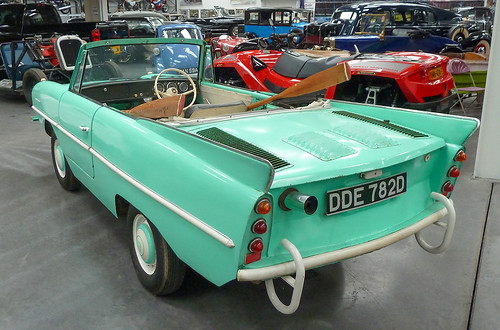 An amazing vehicle was produced in America between 1960 and 1963, but assembled from stockpiled parts until 1968. In total 3,878 car/boats were built, 99 of them converted to right-hand drive.

Notoriously, the vehicle wasn't really very good on the road or water, but the film I've seen of them looks OK, if a little slow. No matter, a serious classic, if you find one in any condition it's going to be worth a pile of cash. And yes, I'd love one.

The only model I know of was scratch built by a guy at our boat club and really looks the part. I've often wondered why we've never seen a kit of an Amphicar, surely it would sell? Even a 1/32 plastic model would be a bit of fun. 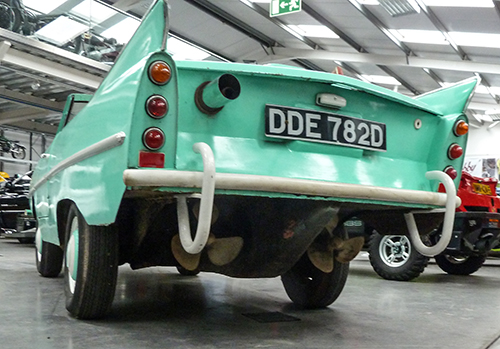 This example is in the Manx motor museum and looks both roadworthy and seaworthy, although I thing "river" or "still pond" worthy would be more appropriate as I wouldn't want to get out on a choppy ocean in one.

More on the Amphicar on Wikipedia.

The oars are a nice touch.

These featured in the finale of a bad British Film- The Sandwich Board Man.

I'm not expecting anyone to start searching - but do you know of any decent scale drawings of an amphicar?

I'm just wondering how difficult it would be to scratchbuild - or whether parts from existing (and hopefully not too expensive) kits could be used if anyone wished to build a model of one.

Incidentally, despite the real vehicle having been produced prior to this, I believe the "D" suffix on the plate would correspond with a vehicle being first registered in 1966.

I understand that Great Britain (NB deliberate choice of wording) moved to August to July registration years in 1967, which would have led to an "E" suffix referring to January to July 1967.

OK - I know this stuff might come across as rather "nerdy" - but I can remember a number of car manufacturers and dealers making an enormous thing about "new" number plates around July and August.

There are several RC models about. https://gdmbc.co.uk/club-models/amphibian/ and there have been a few diecast versions https://www.clevelandsdiecast.co.uk/p400097032-1-43-amphicar-1965-yellow I think Hotweheels did one as well.

Thanks - those Gloucester models are incredible. I have seen most of them at shows and they look as good as you'd hope. Not crude models but serious quality modelmaking.

The Twitter piece is very handy as you could scale plans from it.

I'm not going to try to make a diecast float though!