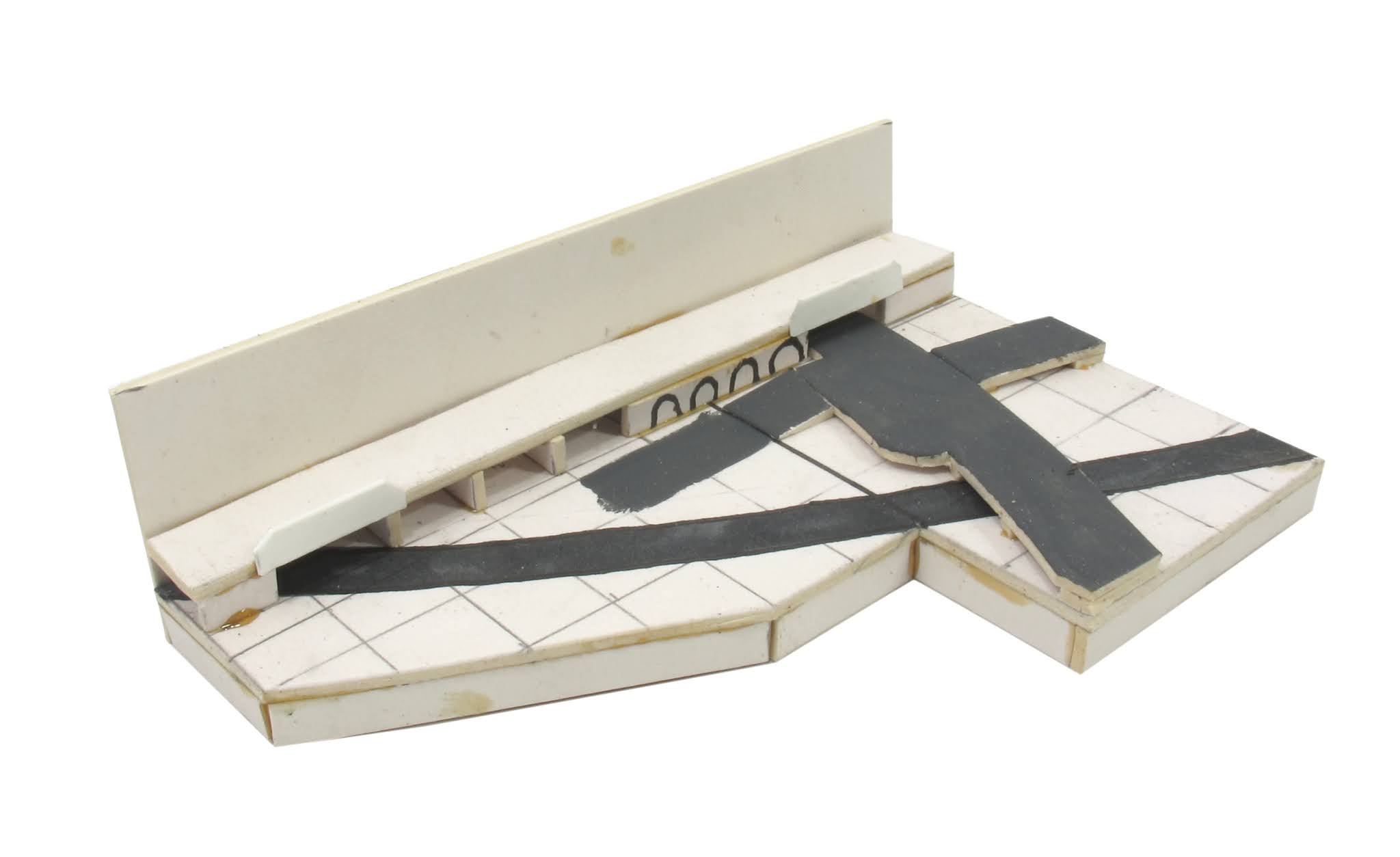 The second Selly Oak model spins one of the baseboards 90 degrees to provide a 3ft deep scene that gives me much more road space at the cost of some railway length.

We've taken more liberties with the prototype - that centre industrial/scruffy space is a lot smaller for a start, and the pair of canal branches are gone. A road runs down in front of the arches, which will be blocked in to provide space of businesses.

If you look at the third photo down on this page, there appears to be a gateway where I have added one. Click on it for the more modern view and that roadways is definitely there. Lock-ups under the arches are pretty much a given too as well as making the modelling easier and more interesting.

Another liberty is the addition of a bus stop with pull-in. There really is a stop at this point, presumably for both station and factory, but it's just a plain bit of road marked with an easy-to-ignore pole. We need parking, there should have been more bus space in real life, so we'll fix this on the model.

All this has changed the angles where road, rail and canal cross each other, but I'll deal with that in due coarse.

The important thing is this plan ticks all the boxes. Now I just need to build it.

I'm always interested in odd baseboard configurations. Have you thought about giving it a curved backscene and presenting it to the viewer at a different angle?

I must admit I'm not convinced that canal is going to work. In practice, to look realistic, it will end up taking up a lot of baseboard.

The problem with curved baseboards is they are way out of my ability to build them and the timescales don't allow for ordering bespoke boards. The canal is fine, it's a space filler that provides a handy front edge and since the real thing is down to 9 feet wide in places, it's not taking up much baseboard.

Would I be correct in assuming that you're not the World's greatest fan of "flexible MDF" (thin MDF sheet, with loads of parallel grooves cut into one face)?

To be brutally honest, I can't say I'm exactly convinced by it - well, it's MDF, with all its well known "baggage".

OK - I know the stuff might well be sold at a number of DIY "box shifters" - and it would be relatively straightforward to fix a backscene to the stuff using double sided carpet tape - but it's still MDF.

No - if I needed to add a curved backdrop to a model scene, I'd be more likely to look at 1mm Palfoam / Palight or even card - but I'd probably leave the MDF in the shop.

Just a personal opinion, you understand.

No problem with flexible MDF - but I don't want to fix the backscene to this model. I want to be able to shoot photos from both sides of the viaduct.