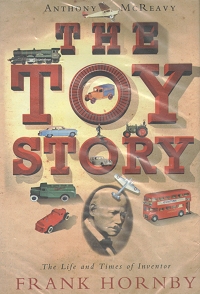 No, not the Pixar film, this is subtitled "The Life and Times of Inventor Frank Hornby". The man who invented Meccano, Dinky Toys and of course, Hornby model railways.

McReavy has writen an odd book - part biography, part social history and part business history. Hornby's life is covered from humble beginnings as a meat importers clerk through the creation of the business we know him so well for to the years spent as an MP.

The text covering Meccano and later model railways is contrast against the changing world of childrens' toys. There is an awful lot of "big picture" stuff explaining how the concept of a toy is relatively recent. Late in the 19th century, there may have been playthings but little in the way of a national or international market. The idea of playing with a toy on a Sunday was even frowned upon.

This isn't the earliest reference, we kick of in 1571 with the first children's book and pass by the publication with the wonderful title "A Token for Children: Being an Exact Account of the Conversion, Holy and Exemplary Lives, and Joyful Deaths of Several Young Children"by the end of the first chapter.

Happily things gain a bit of focus and we get to know exactly how Meccano was invented. The trials and tribulations of it becoming the greatest toy in the world between the wars and then then eventual decline in the 1950s and 60s.

All this might sound a bit weird but it works. Not only do I know Frank Hornby's history, have an idea how he created his empire, but I have a grasp of the background and times in which he did it. The man was at the forefront of marketing and selling the product. A regular visitor to America and the continent, he revolutionised distribution methods and was copied by many. The legal battles that accompanied this copying also get a mention as do many who had similar ideas before him.

If you are interested in the man to whom railway modellers owe a debt of gratitude, then this is a good read.

Buy The Toy Story from Amazon