Telford is a dump.

I mean, who thought it a good idea when planning a "New Town"that the railway station should be a long and hilly hike away from the shopping centre at the middle of the place? Walking through desolate office blocks in the pouring rain isn't a great way to arrive anywhere.

You might think that travelling by car would make more sense, but you'd be wrong. At least after the hike from the shopping centre to the exhibition centre, pedestrians know they will be able to get in. Not so the motorist who will find that for an event attended by more people than might be expected at Nigel Farrage meets all the foreigners he likes convention, the modest car park will be full and you'll be cruising around the road system looking for somewhere to stop.

If the show wasn't so spectacularly good, I'd definitely think hard about braving the place.

The queue 15 minutes after opening was so long that there was plenty of time to dry off. Efficient door teams and a sensible, 1-note entry price saw us all in the 4 halls quickly and painlessly.

You can judge how popular the event is because in the furthest hall from the entrance, one Japanese high-end kitmaker was telling crowds their latest release was sold out by 10:45. 200 German WW2 flying wings with 3-figure price tags and a level of detail to match, all gone. 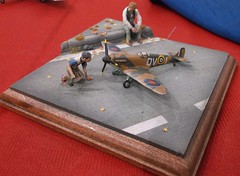 usiness was brisk around the rest of the show too. A staggering array of trade from those selling new or second-hand kits through to people with resin or etched upgrades and even complete models to paint and pigment suppliers.

Wearing my journalist hat (the one with a card marked "Press" tucked in the brim), I was on the lookout for new product to bring to the attention of the railway modeller. I also felt that I didn't own enough un-built plastic kits and needed to do something about this.

Inspiration models were everywhere. In an effort to see the show in a reasonable time, I largely ignored military models. Even then I was there over 6 hours. By the end I'd seen many model boats I fancied having a go at and quite a few road vehicles. I know I'd struggle to paint cars as well as those on display but that doesn't stop me wanting to have a go, or to buy the sort of polishing abrasives that might make this possible. 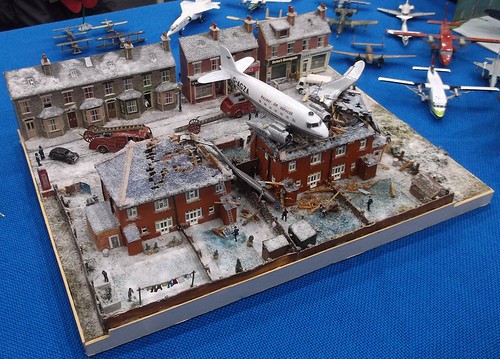 One of the more interesting dioramas was of an air crash. Not a gory spectacle with bodies strewn around but a realistic depiction of a real event where no-one was hurt. In December 1946, after taking off during a heavy snowstorm, a Douglas DC-3 operated by British European Airways, flying from Northolt to Glasgow, crashed onto the roof of a house in South Ruislip. Once ice covering the fuselage was chipped away, the crew and passengers exited and walked down through the house. This was later restored and named "Dakota's Rest". Amazing. 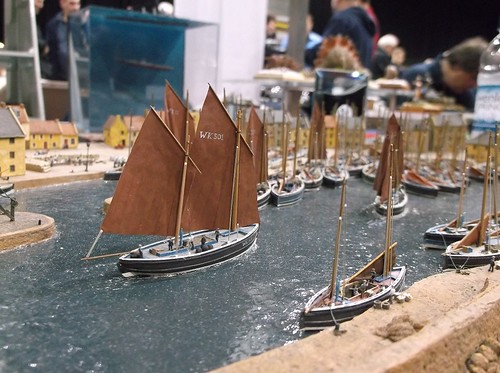 I also really liked a harbour scene which appeared to be built to 1:450, what railway modellers know as T Gauge. The level of detail was amazing and the colours of the sailing vessels spot on. Not a kit in sight either as far as I could tell.

By the end of the show, my bag was heavier to the tune of a cartoon resin Dalek, Captian Bluebear and crew and a Space 1999 Eagle - a kit I've always wanted and managed to bag for sensible money. Mind you, I bought Moonbase Alpha last year and it's now been re-released for about a fiver more than I paid, but at least mine is in the original box, which it will stay in until I get around to building it.

Oh, and Telford managed to work it's magic even on the way home. While the rain had stopped, the train I aimed for broke down en-route and a huge crowd spent half an hour worrying they were marooned in the place...

More photos on Flickr
Posted by Phil Parker at 5:30 AM