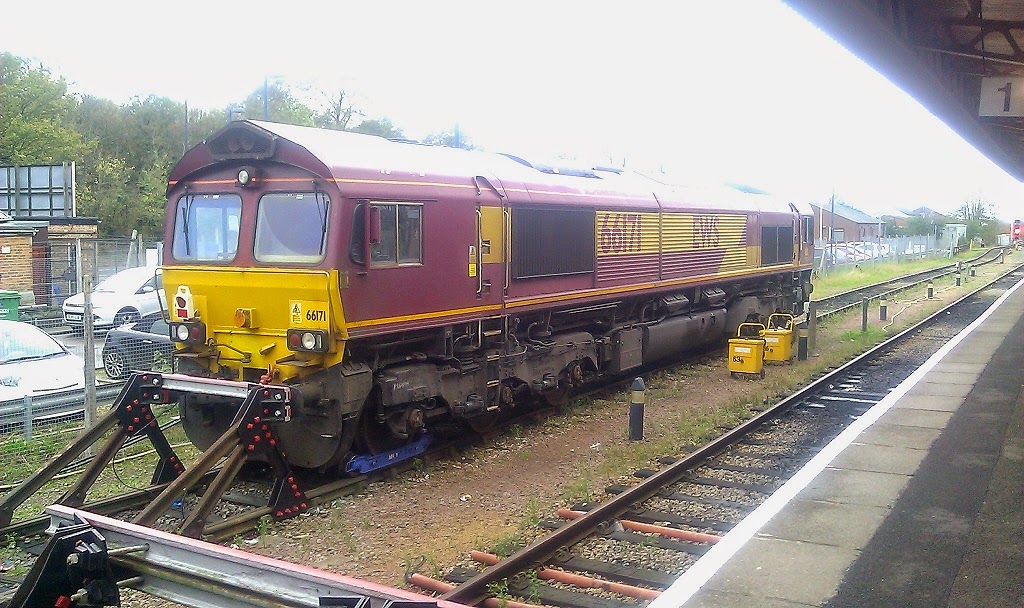 I've been out an about over the last few days and happily, this has generally been by train.
In a siding usually occupied by DMUs at Leamington station, stands 66 171. I'm presuming it's dead or at least very poorly as I can't see any other reason for it to be stored there.
The bit that interests me is the tail lamp attached nearest the camera. At the other end there is a lamp in the cab, shining outwards. Not being a modern train aficionado, I wonder what they are doing?
Maybe the lamp in the cab is to stop DMU drivers running in to the thing but at this end? Has the loco been towed and the light clusters don't work with the power off?
Whatever - an interesting modelling point for anyone dumping a model in a siding on the layout.

Hi Phil, If you have a look at the wheelset nearest the camera you will see that it is on a Skate. This suggests that there is something seriously amiss with it. The loco has probably failed out on the main line. The breakdown gang (or whatever they are called theses days) have gone out and jacked up the loco and fitted the Skate. Meanwhile another loco has arrived and then once it was ready to move towed it at 5mph to the nearest siding.

I can't beleive I didn't spot the skate either when looking at the real thing or posting the image! Put it down to a busy weekend...

Would make an interesting modelling project for a broken loco though.