This is my Dad's racing car. It has a Mongram kits body, K's motor, Supershell chassis and MRRC wheels and steering. The scale is 1/32nd. He used to race at the Luton airport social club back in the 1960's.

This is how slot racing was before the advent of all that ready to use Scalextric stuff appeared. Handcrafted models with steering that worked. Proper modelling.

This post was prompted by an entry in Iain Robinson's blog about Slot Car Racing 60's style. I looked at the picture and immediately recognised cousin Keith (he is pretty distinctive and hadn't changed when I last saw him a few years ago) second from right. It also fascinated me that they were all smartly dressed to go racing - I don't look that posh when I go to work ! 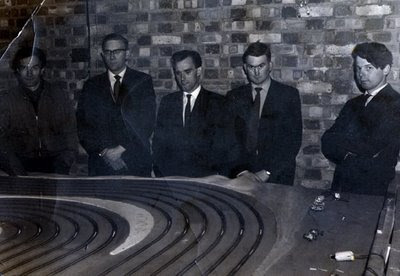 What's really impressive about the whole thing is not that my Dad was an avid racer despite never learning to drive or being at all interested in cars, but that everything had to be made. The 6 lane track is scratchbuilt. Reading magazines from the era, the surface was usually hardboard and there was much debate about which way up it should go - rough side (better grip but less skill required in the corners) or smooth (faster racing once you got going but more skill needed at the start).

Nowadays these tracks were made from ready made bits I believe. Much of the racing is carried out with car shaped projectiles featuring laser cut chassis and moulded tops. A far cry from the days of buying an Airfix kit and fitting mechanical gubbins yourself. Personally I think things were better in the old days but then that's just me.

And yes, when I look at the car I do wonder if it would be fun to make and race one myself. Perhaps it's in the genes.