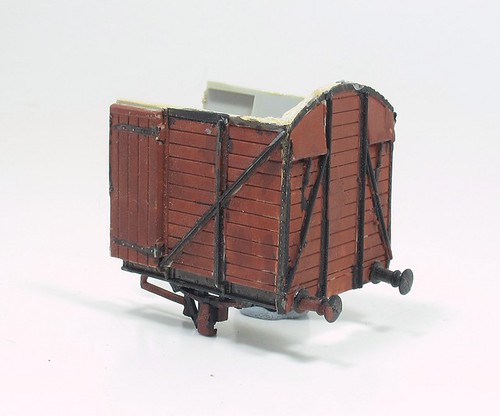 Bringing up the rear in this nostalgia-fest, is my first kit built wagon. Built from a Keyser Model kits plastic kit, I recall finding the model in a shop in Luton. It was cheap enough for me to spend some pocket money and the box said it was "Super" in big letters.

As it happens, the kit was reasonably simple to assemble but the plastic wheelsets running in plastic W-irons didn't work as well as even 1980s Hornby wagons. I didn't know much about adding weight to improve matters and even if I had, there wasn't a floor to stick it on.

I obviously didn't know much about prototype liveries at the time either but brown with black ironwork looks nice and doubtless provided several hours worth of entertaining painting for me.

The sharp eyed amongst you will have spotted that the wagon is no longer complete. Keyser provided more then twice as much plastic as you see here and that's because I converted the rest in to a van end poking from the door of a warehouse on Melbridge Dock. 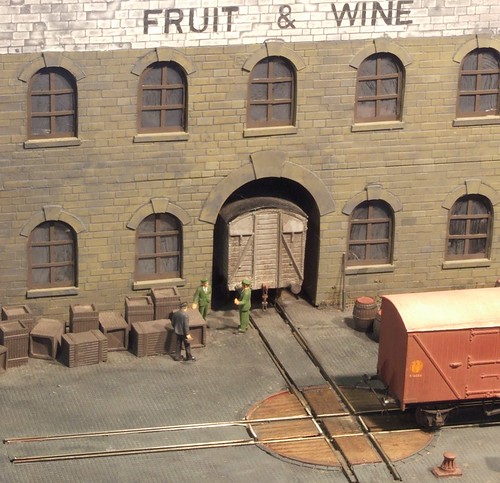 I mention this because as I struggle to persuade modellers at shows to dabble in kit-building, it's worth realising that if your first efforts aren't perfect, it's not necessarily wasted time and money, the odd scenic item of rolling stock can usually be accommodated on a layout. Think grounded body or ancient wagon rotting at the end of a siding.

Which is probably why I still have this end of the wagon. One day I'll find a use for it.
Posted by Phil Parker at 5:30 AM