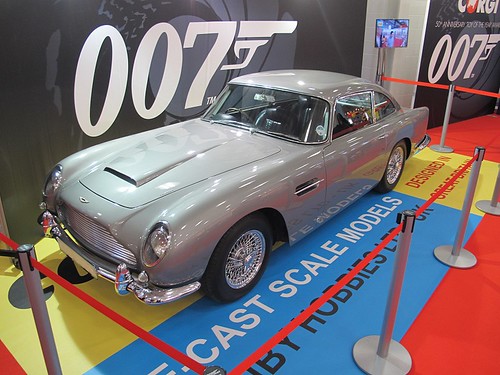 With my journalist hat on, I headed to London on Wednesday to the annual Toy Fair at Olympia. It's where we see what everyone will be fighting over in 11 months time for Christmas.

This year is the year of the quadcopter. The things were everywhere with many stand having a large selection in all sized from tiny to massive. Some of these things are over 2 feet across so I can see the upper classes having fun blasting them out of the air as a change from clay pigeons. That and car boot sales being full of unwanted toys in a few months time as people get bored. 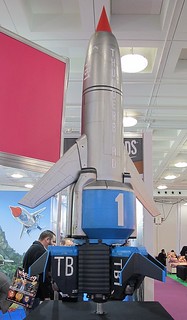 It seems that Thunderbirds is due for a new outing, this time with a mix of CHI and models masterminded by Gerry Anderson's son.

Purists will be pleased to see that the updated craft don't look massively different from the classic 1960s versions and that we can forget the terrible live action film of a few years ago. No sign of FAB1 but let's hope the owner of the Rolls Royce brand doesn't make them go away and speak to Ford again.

Obviously I was mainly looking out for model railway or boat related stuff. Railways were covered by Oxford Rail and Hornby and I've mentioned these over on MREmag.com.

I caught up with the guys on Pocketbond and asked about their resin building range. Apparently it's back on the market but they are struggling to find anyone to make the stuff in China. Like the RTR manufacturers, they find the workforce tend to prefer better paid electronics work than smelly resin building making.

Boats were thin on the ground. There were some RTR models including what appeared to be a nitro boat nearly 4ft long on the Flying Models stand. Big news is that Playmobile are producing a radio control unit for their boats later in the year. A complete package, you just slot it under the hull for power and control. Using a pair of water jets, there's no need for rudders or exposed propellers.

The surprise is that it's 2.4mhz - the firms previous RC efforts have been 26mhz - and 2.4 doesn't penetrate water very well. Presumably as the unit is only just under the surface, this won't be an issue, especially as the range doesn't need to be huge.

I can see plenty of grandads buying in to this and others just grabbing the module to put under a scale boat to save the effort of fitting proper RC.

Sticking with RC, Revell have a nice little fire engine model that's nowhere near scale but could easily yield parts to fit in a 7mm scale model car. Top speed isn't impressive (for kids) but with a heavy body on top, might work for modellers. £14.99 gets you a toy to try out anyway.