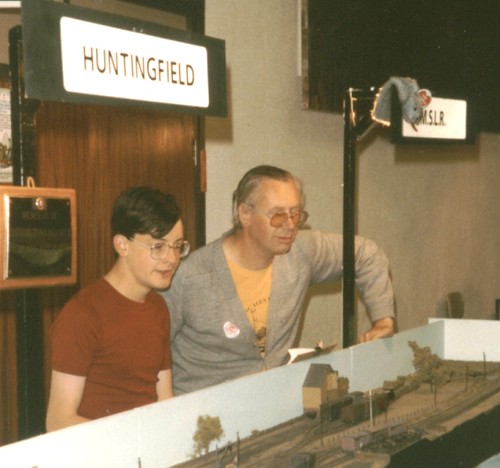 Last week, one of the best modellers I have ever known, John Webb, died.

As you can see from the photo above, I knew John for many years. I think this was taken around 1984. He was incredibly modest about his skills but always turned out the most breathtaking modelling. Several of his locos won gold medals at the Model Engineer Exhibition and I remember him bringing down to the club a set of coaches that had just picked up a silver. This disappointed him as he thought they were more bronze medal standard and that would have given him a complete set!

His Midlands Spinner, Crampton and steam railcar were all delights to behold and as good a model of each as you could ever wish to see.

That's not to say John was a desperately serious modeller. Working as one of the Rover car companies  pattern makers gave him access to woodworking machinery which he used to produce excellent rolling stock box kits for himself and a few friends. One friend, Dave Elbourne, passed over a set of measurements that once the box was constructed, turned out to be half a wagon short.

A few weeks after Dave had discovered this, and recovered from the ribbing that resulted from it, John turned up at the railway club with a special wagon. Looking to all intents like a normal OO model, it had a special feature - the length could be changed. Clever work in the sides allowed the wagon to be extended or shrunk - to fit the stock boxes!

Needless to say, the wagon worked perfectly on the layout so we'd include it in trains on "Scotland Street Yard" and operate it as normal. Occasionally you would find the headshunt a bit short but if the special wagon was in the train, no problem. Those watching the layout were amazed when a long train suddenly fitted into a short siding.

John's Magnum Opus was a model in EM gauge of Ambergate triangle. The model ended up 38ft by 18ft and a very odd shape. Baseboards were plywood and thanks to some free wood from work, enjoyed 12mm thick ends. Stable but b****y heavy much to the anoyance of certain members of the exhibition team who had to carry it! However, when running properly, the model looked fantastic and amazed the crowds with trains arriving from all directions.

Fortunately the layout still survives. Now re-gauged to P4 standards, it has a permanent home and remains as a testament to its builder.