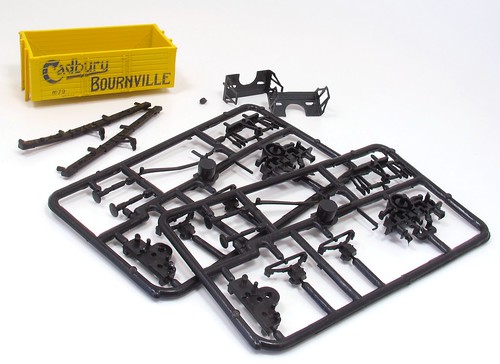 Loitering in the BRM office a few months ago, I spotted the pre-production shots of a limited edition Cadbury's wagon were were going to commission from Dapol.

By the time I'd seen them, the bodies had already been assessed and comments passed back to the manufacturer so this one was surplus to requirements. Since it's future probably involved being stuck in a drawer and forgotten, I liberated it with a view to sticking a kit built chassis underneath.

My plan to do this quickly evaporated but last week I found myself in Modellers Mecca and on the counter was a box of cheap kits. £3 later I'm the proud owner of a Peco Wonderful Wagon kits chassis kit. Not state-of-the-art but then neither is the body so I can live with this. More to the point, I didn't have to dig through my stash of bits to find another kit.

The Peco chassis was packed on the 10th December 180 by S.W. according to a slip of paper in the packing. Most of it is made from rubbery material to allow the working axleboxes to spring in the metal W-irons. It's designed to be fitted to a Peco kit, but that's not going to stop me.

Should you want a similar wagon, it can be bought RTR here.
Posted by Phil Parker at 5:30 AM