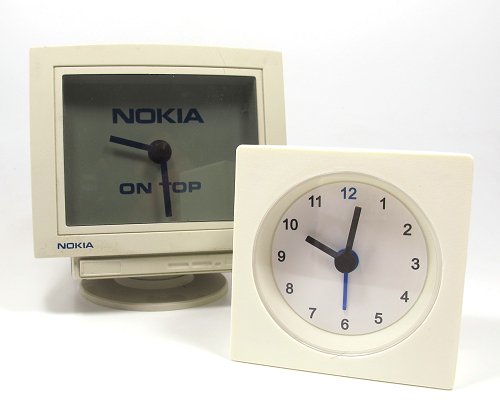 Years ago, I bought a computer monitor shaped clock from someone on eBay. I've always liked clocks and have to stop myself building a vast collection of them in all shapes and sizes.

The Nokia monitor is only 10cm wide and sits on a shelf by my real computer. When I first bought it, monitors were this shape. Now the one I type on is thinner than the clock!

Anyway, given out as a freebie at some show, it wasn't built to last and the mechanism stopped working after a couple of years. Sensible people would throw it away but I'm not, so I didn't.

Instead, during a recent trip to Ikea, I bought a VÄCKIS alarm clock for the breathtaking price of 80p. I don't even want to think how they produce something with mechanical bits so cheaply... 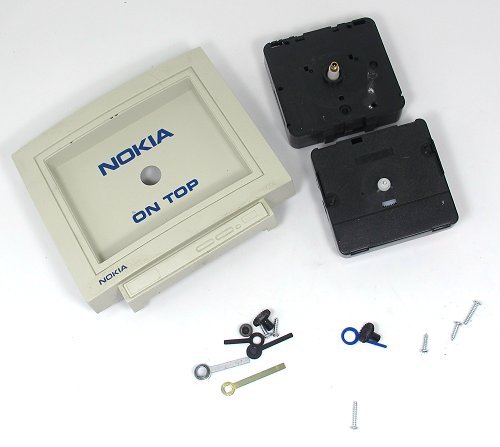 Taking both clocks to pieces was a matter of some cross head screwdriver work and prising the clear plastic out of each gently with a tiny, tiny, screwdriver under the edge. Hand and adjusting knobs bulled off the back of each.

Sadly, the Nokia hands won't fit the Ikea mechanism but its own hands don't look too bad. 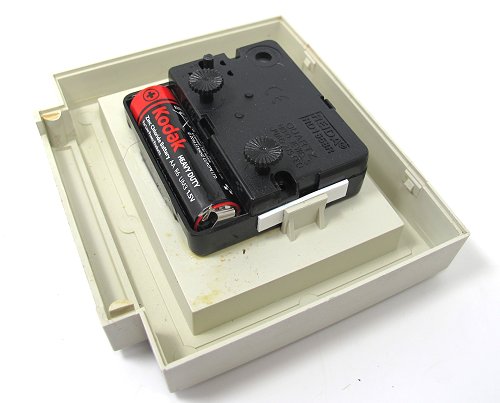 Neither clock uses a screw in holder around the hands. The Nokia clips into place behind the face. As Ikea don't use the same clips and their mech is slightly smaller, I put a couple of dots of superglue between face and black plastic casing and then wedges some 1mm thick plastic sheet behind the clips to grip the part firmly.
After this, the face is clipped back on its body and all is well again. There's even so much space in the monitor that the old mechanism can be tucked in there in case this turns out to be a rare collectable and needs to be restored.

my parents grrew up during the 1929 - 1939 Great Depression ( 35% unemployment rate in Australia ) so the adage of "waste not, want not" was applicable, and still is in many Third World countries. Many modellers of the 1950s and 1960s
put redundant and waste objects to good use, Peter Denny's Buckingham Great Central layout being a case in point.
Most appropriate response in a First World country where far too much good gear ends up in landfill.New House building being a case in point where excess tiles go straight to landfill due to high handling costs of storage.