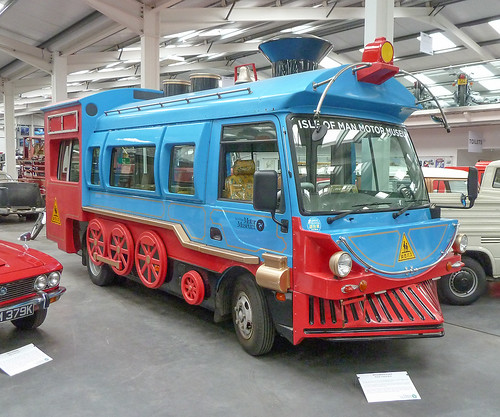 
My expectations weren't high for this. The sign, and indeed the view through the windows, suggested lots of motorcycles and while I enjoy watching the TT, two-wheel transport isn't much more than a passing interest. I've never ridden a motorbike and don't really have any desire to do so. - but the race is a big part of the Manx world so I reasoned a single visit would be enough.

Boy, was I wrong.

Inside, the cavernous building are over 250 exhibits. Yes, there are a lot of motorbikes, but these are mostly confined to the mezzanine levels. On the ground floor, there is everything else mechanical you could want.

Just past the pay desk are many cutaway models of cars and engines. Proper ones made by manufacturers to demonstrate stuff at trade shows. 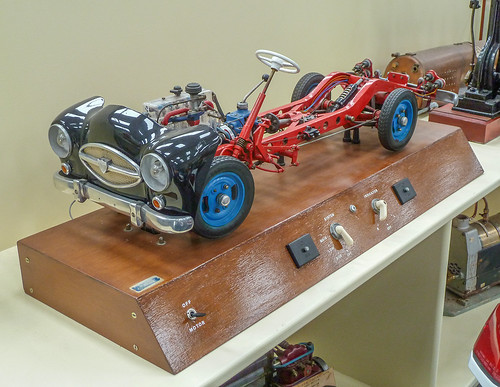 In side rooms there are more engines including lawn mowers, stationary engines and steam railways. Admittedly these are mostly model engineering scales, but there are a few cabinets of RTR model railways.

One motorbike display on the ground floor shows Bonneville racers - and suddenly I'm chatting to the guy who builds them! 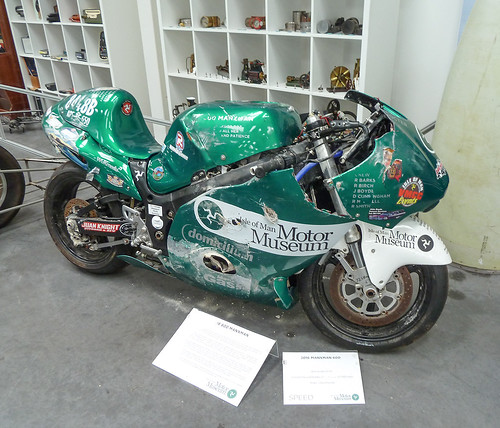 Chris Proctor is a self-taught engineer and speed freak. He talked me through the components of three different engines while I nodded and tried to keep up and not look too stupid. The engines are assembled from modified commercial parts but with a full understanding of how everything fits together and the "tweaks" required to ensure your machine operates. Laying down the power on the slippery slat surface is hard enough, but you can save some weight by ditching the front brakes since slamming these on is NOT a good idea.

As proof that this stuff isn't easy, Chris's bike is a bit broken, as was his leg the day after he took a speed record for his class. Now he's building a car to race there, the nosecone of which was on display. 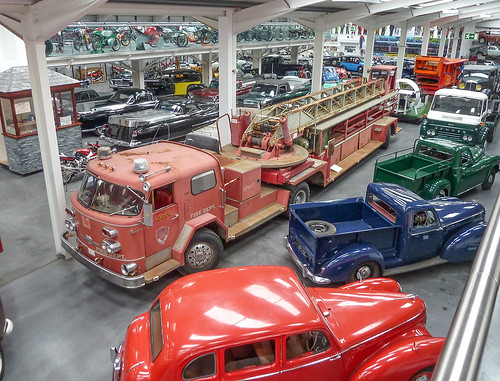 All of this is down to father and son, Chris and Daryl Cunningham. They have collected the vehicles and funded the museum. Manx enthusiasts have lent cars to fill the space but at it's core, this is a dream garage.

It's a garage that is still filling up. One of the volunteers took me behind the scenes to see a London airport double-decker bus and luggage trailer, converted into a huge campervan for a 8000 miles trip around America. Next to this is a prototype rotary-engine Citroen. And a flower car from America (they follow the hearse with the back full of flowers), one of several in the museum and something I'd never seen before.

In fact, things I'd never seen before turned out to be a theme. One visit certainly won't be enough!

More of my pictures on Flickr
Posted by Phil Parker at 5:30 AM

"Just past the pay desk are many cutaway models of cars and engines. Proper ones made by manufacturers to demonstrate stuff at trade shows."

That cutaway car model reminded me of a similar one that I seem to recall being in the window of a driving school's premises, on the Cheltenham Road in Bristol.

Unfortunately, when I saw this, it was about 20 years ago, long before the days of smartphones (and my 35mm SLR was slightly too large and heavy to carry with me every time I decided to use my train season ticket for weekend daytrips) - so I unfortunately never got a photo of this.

The model also looked very old at the time - I hope it still exists, as I seem to recall it looking rather nice.


Whilst on the subject of old mechanical models, I'm also reminded of a cutaway full sized model car gearbox, which I saw about 40 years back, in a school Physics lab - precisely the sort of thing that would help to generate and maintain the interest of this technically minded (then) teenager.

Something else that helped with this came in the form of the Physics department's challenge in my school's annual "Eisteddfod". When I attended this school, they invited pupils to build models to demonstrate anything connected with Physics.

Although there was nothing particularly memorable about any of my models, I was definitely in my element. An excuse to build "technical" models? Thank you very much. The chance of some kudos for enjoying my hobby? I wasn't exactly complaining about that, either.

Of course, this was quite a while back - in fact, the school I attended is due to be demolished, once some contractors finish building its replacement alongside.

OK - I know these school buildings date from the late 50s / early 60s (and are probably life-expired and riddled with asbestos and other "goodies") - but I've still got happy memories of science practical classes (especially Physics).


Anyway, returning to the subject of transport museums, I don't know if you've ever visited the National Motorcycle Museum (next to the M42 / A45 junction, near Birmingham Airport). Like you, I've never ridden a motorbike, but this place is something special (even the stuff before the paydesk is amazing - but, afterwards, it gets even better).