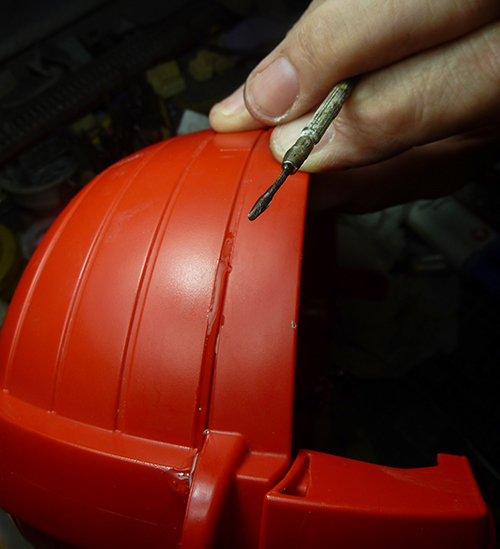 With a fresh battery delivering plenty of volts, the ark charged around the pool creating a bow wave. A couple of minutes later, there was a little pool around the motor support.

As I had thought, water is getting in in the join between hull and top of the hull. Sealing around the inside might have slowed the flow, but it still came in under the foam motor support. The only solution is to fill the gap around the hull.

I'd not wanted to do this as it's highly visible but better that than a sinking boat.

In my toolkit are some syringes and needles. I wondered if I could put epoxy in one of these and squirt a very thin bead into the join.

I couldn't. The glue wouldn't go down the needle. It did come out reasonably neatly from the needle-free syringe but quickly blocked the nozzle.

It was no good, I had to mix a fresh batch of glue and apply it as neatly as possible with a small screwdriver. As it happens, the result wasn't too bad, but not as good as I would like. 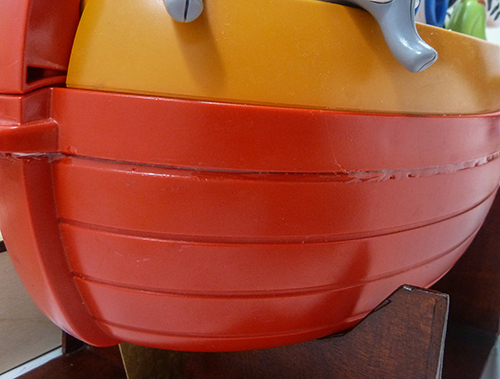 I'm going to try cleaning this up a bit once it is fully hard, but if this fails, it occurs to me that a length of yellow Trimline tape would look OK and cover any mess. If I'd thought of that earlier, I'd have tackled this job earlier.
Posted by Phil Parker at 5:30 AM

Could you have impregnated a piece of rope with epoxy and then glue the rope into the groove as a fender?

I seriously considered a strip of white square plastic if I was confident I could find a solvent that would firmly fix it in place. The problem is around the front which isn't quite in line. I did cut some plastic and put it in the larger gap though.

Flexible silicone (bath) sealant? The stuff that dries rubbery. I once had a small tube of translucent stuff that I used to fix a small leak in the seal of my car windscreen.

That is why I thought about rope.