Ships on the rock 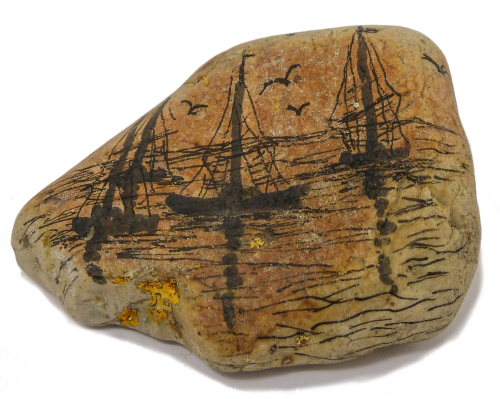 Wandering around Ramsgate at what appeared to be considered late on a Friday evening, I searched for a postcard to send to a friend. Despite being a seaside town in the high season, and it not quite being 7pm, everywhere was shut apart from a dodgy newsagent/general store where I purchased my breakfast from for the next day. (Swiss roll since you ask. It was the best option sadly).

Anyway, walking past an art gallery, I spotted cards and they were open.

My luck was in, they were open for the launch of a new exhibition, so as well selling me a couple of cards, a glass of prosecco was thrust into my hand.

Mooching around and drinking my wine, I was really taken by may of the objects on sale. I like a bit of art and the stone above just leapt out at me. There were three to chose from but I like the colours in this, almost like a sunset. 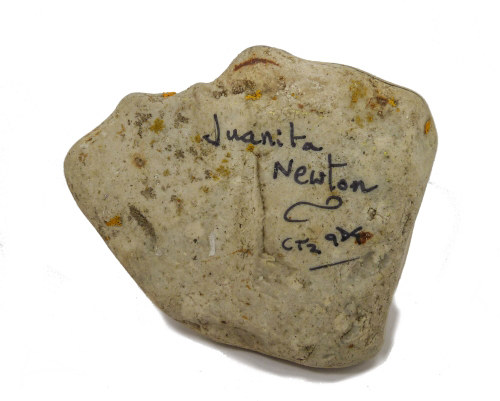 It might look like a pebble that someone has drawn on, but I love it. I like the simplicity and effectiveness of the drawing. I like that it is signed by the artist - Juanita Newton.

I also like that I knew I had space for it in a display cabinet and that I could own such a thing for a fiver. Something unique and made by a real person.

Chatting to owner Suzy Humphries about art and more importantly, the joy of making things, my eye was drawn to several other goodies and I eventually left with a couple of Christmas presents. The pottery fish didn't come with me as I simply can't think where they could go, and the stunning glasswork was just too much for my pocket even though the price was very reasonable.

If you find yourself in Ramsgate, head to the Nice Things gallery on Harbour street. It's a real jewel in the centre.
Posted by Phil Parker at 5:30 AM

Email ThisBlogThis!Share to TwitterShare to FacebookShare to Pinterest
Labels: art