Lights on, no action 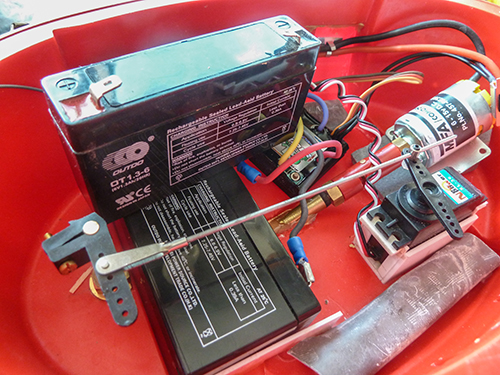 Having ascertained that the electrics in the ark were working, my plan for a good long sail was thwarted.

Switching on the model after charging the battery overnight, the Viper speed control showed both red and green lights and the servo had the jitters. All the channels on the receiver seemed to have swopped around too.

How could this happen? The only thing I'd done since it had worked before was charge the battery.

After a fair bit of pugging and wiggling, I gave up and pinched a battery from another boat - one on charge for a visit from my cousins (who needed to be entertained) a couple of days later.

This seemed to cure things, but then I put a meter on the batteries.  The good one gave over 6V, the duff one 4.something. At a guess, not enough for the receiver or speed control.

Diagnosis, my charger is faulty.

Digging around, I found a Thunder Tiger version and a suitable lead to connect it to the battery. A few hours later, the meter said 7V. Not sure how that works, but I'm thinking this proves it can hold a charge.

More importantly, I managed to get the boat on the water and find out how it leaks.
Posted by Phil Parker at 5:30 AM

Lead acid batteries have to be charged at a higher voltage than the ststed battery. A minimum is 2.15v per cell or they won't charge at all. A cell is 2v. Your 12v car battery charges at a fraction over 14v in the car. To over simplify - the higher voltage is needed to 'ram' the charge into the battery and make the chemistry work. At the instant you disconnect a charger you can often see this higher voltage before it drops back to the full value - which is higher than the stated battery voltage. A 6v lead acid cell will be charged at a fraction over 7v and may show this high value when you initially disconnect the charged. If you test a 6v lead-acid charger and it reads less than 6.5v when connected to the battery then it is failed. Hope this helps.

That sounds about right. My test was just after I'd finished charging.