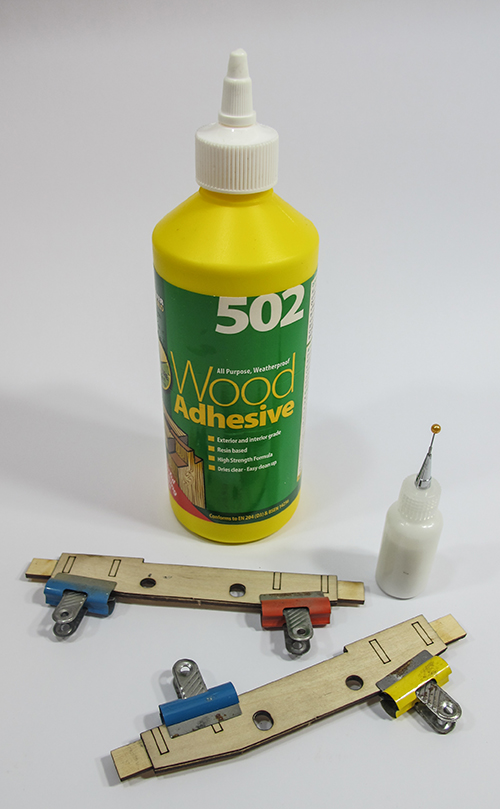 With some kits from Petite Properties on the bench, I asked them which glue they recommended. A bottle of 502 adhesive was waved at me - apparently, it's the only PVA in the workshop.

I knew I'd seen the stuff somewhere and a quick web search took me to Tool Station where it's a fiver for a litre. Fair enough, when I was passing I picked some up.

The dolls house makers are right. To date, I've been a Resin W man, or a big tub from Homebase depending on the job in hand. This stuff flows a bit better than Resin W but not as a freely as the cheap stuff. It grabs quickly and dries as fast as any.

Decanted into a Metcalfe Models Ultra Fine Tip applicator, it's very easy to use too. Even from the big bottle, it's controllable and the nozzle of this doesn't seem to gum up as fast as the resin W version.

The frames of Polar Bear were laminated up and seem to have stuck. I'm sure someone will say all PVA's are the same, or that they have used this stuff for 100 years, but I'm impressed, which is why I put it on here.
Posted by Phil Parker at 5:30 AM

Thanks for the "heads up".

You're right about PVA adhesives - they're most definitely NOT all the same. With some, you can get rid of spills using water - with others, you can't - and that's before anyone gets started on thick or thin they are, or how well specific adhesives "grab".

To be brutally honest, it all strikes me as being in a similar vein to cyanoacrylate adhesives - some are amazing - whilst I struggle to find anything "super" about certain ones.

Changing the subject slightly, I seem to recall some laser cut wood / MDF kits appearing in BRM - and a simple example even being produced in connection with one past edition.

Clearly, I don't wish to get into discussions about any specific kit being of use to certain people and not to others (that was always likely to be an unavoidable fact).

However, if any of the BRM team are involved in designing a laser cut kit at some point in the future, what's involved could form the basis of a very interesting magazine article.

I've got a couple of reasons for saying this:

* I'm also trying to work out if this might offer an effective method of building a model of a pioneer railcar, which includes stuff like multiple layer panelling.

OK - I'll probably have changed my mind a few times by the time I get round to building this model - but finding out what's involved might make it easier for me to make the right decision.